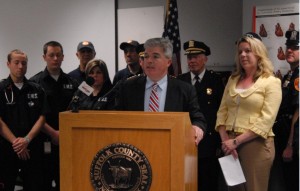 Naloxone, more recognized by its trade name, Narcan, is an opioid antagonist that is given to patients with opioid overdose to reverse the effects of the opioid. Patients respond quickly to Narcan, and there are minimal side effects or contraindications to its use.

NY State EMS regulations require the county to first test the ability of Basic EMTs to recognize opioid overdose and safely administer the medication, and to ultimately change a skill from one level of provider to another. Once the pilot demonstration project is complete, it is expected that basic EMTs will be administering Narcan to patients with a needleless atomizer though the nose. At present, the medication may be administered at the scene of an emergency only by Advanced EMTs. 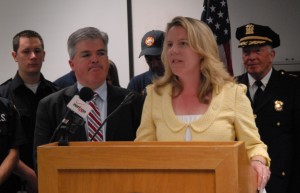 “Opioid abuse has emerged over the past few years as a major public health issue in Suffolk County and across the country,” said Bellone. “We have been addressing this issue in Suffolk County on many levels. On a day that coincides with EMS week, we roll out our Regional EMS Opioid Overdose Prevention Project that will put Narcan, a lifesaving and time-dependent medication, into many more hands within our county.”

According to Dr. Tomarken, “The major clinical signs of overdose are altered mental status, which leads to the inability to control one’s airway, and respiratory depression or respiratory arrest.  If untreated, this lack of oxygen can very quickly lead to brain injury and death.”

Narcan use in the out-of-hospital setting is currently limited in New York State. At present, Narcan may be administered at the scene of an emergency by only Advanced EMTs, either intravenously or by injection. Last year, Suffolk County Advanced EMTs administered 570 doses of Naloxone as compared to 279 in 2010 and 250 in 2009.

“This project is so important because it will save lives,” said Legislator Kara Hahn, who last month introduced legislation to extend the project to include police department participation. “I was a proud sponsor of this legislation and believe that this pilot program, which now includes sworn police officers, is critical to saving lives in Suffolk County.”  All sworn police officers initially receive Basic EMT training when they are trained as police officers.

Over 5,000 EMTs currently serve as Basic Life Support technicians, inclusive of sworn officers,  in Suffolk County, most of them on a volunteer basis. Approximately 850 serve as Advanced Life Support technicians, both paid and volunteer. Those who deliver Advanced Life Support services are trained and certified to not only administer Basic Life Support but also to initiate invasive procedures, which may include administering IV access, intubation, and/or medications in critical and time-dependent situations, such as with cardiac arrhythmias and drug overdoses.

Recent data suggests that Narcan can be as effective when given by inhalation through the nose, using a needleless atomizer.  This method of administration also reduces the risk of needle-stick injury in a high risk population. Narcan by inhalation is currently used by Basic EMTs in Massachusetts, Colorado, and California.