Last month the Huntingtonian Newspaper along with support from Councilman Mark Mayoka made arrangements for Robert Freeman who is the executive director of the Committee on Open Government to hold a workshop for F.O.I.L. Officers and the general public.  Those who attended had the opportunity to have their questions answered. Mr. Freeman is a very engaging and candid speaker.  He feels strongly about open government and the people’s right to know how the government is operating and spending our money.

Our intentions in organizing the workshop was to help provide all parties involved with a better understanding of both the Freedom of Information Law (F.O.I.L.) and the Open meetings Law (OML).  Many frustrated residents feel that Town Hall is often in violation of the Law.  In fact, last year they were caught on tape scheming to avoid providing information that was requested.  We receive regular complaints as does the Committee on Open Government regarding the way our local government responds to F.O.I.L’s.  The one notable exception is the Town Clerk’s office run by Joann Raia.

In a discussion with Robert Freeman regarding lack of compliance with the F.O.I.L and OML, he suggested a training session.  Our reporters at the Huntingtonian were more cynical than to believe that Town Hall’s Lack of compliance with the laws is due to lack of knowledge of the laws, but we agreed it was a good first step.  Town Hall has made the process of getting information so time consuming, frustrating and in some cases very costly that citizens are often discouraged and unable to pursue the information they are looking for.  We believe this is intentional. 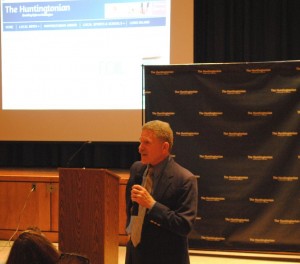 Unfortunately, not to our surprise, Town Hall did not allow their F.O.I.L Officers to attend the workshop.  They gave no reason but through an e-mail from A.J. Carter they said they were going to organize their own event that would be held at Town Hall.  This workshop will not be open to the public. Our response to A.J.Carter when he informed us of this was, “seems like a missed opportunity for the FOIL officers and the public to be in the same place at the same time so we could all be on the same page with the same understanding of the laws.  Sadly it is not surprising”.  They did not respond.  We are fairly certain that the reason they didn’t attend is they wanted to avoid being in a position to be held accountable for their violations of the law.  The last thing Supervisor Petrone wants is for a member of the public to be able to say, “But, Mr. Freeman said…”

In attendance was representative from the Suffolk County Police Department, Several School Districts including Superintendent Jim Polansky, Newly elected BOE member Tom DiGiacomo and Rich McGrath from the Huntington SD, representatives from the Elwood School District, Siela Bynoe from the Huntington Housing Authority, Several Libraries, Village of Huntington Bay and many concerned residents.  Town Clerk Joann Raia attended both the morning and afternoon session as she wanted to be available to hear questions and concerns from the residents. 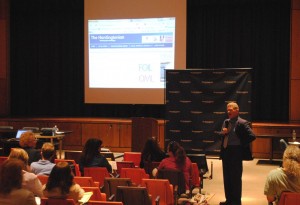 Had Frank Petrone allowed the Town Hall F.O.I.L. officers and employees attend the meeting they would have learned a great deal about how they are not following proper procedure including how long it takes to provide information.  We feel confident that they did not want to be in a position where they could not plead ignorance when being asked for information.  We understand that many Town hall employees are in a tough position.  It is difficult to be more accountable to the public than your boss wants you to be.  Mr. Freeman assured us that whatever we heard at this meeting, that Town Hall employees would hear at their private, closed session. 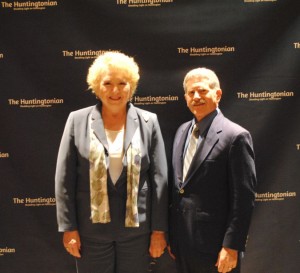