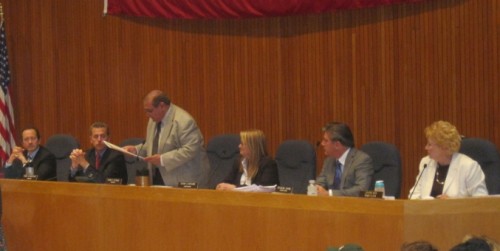 At the June 19th, 2012 Huntington Town Board meeting the Town took action on two resolutions that have received much attention as of late. The first resolution consisted of the creation of Sweet Hollow Park, which was tied to a Transfer of Development Rights (TDR) clause that also paved the way for senior housing on Deshon Drive in Melville. That resolution was approved 4-1. The deal allows for Deshon Partners, LLC to construct 261 units of senior housing on thirteen acres of land and then allows for the sale of the remaining five acres to the BAPS religious organization in order to erect a religious facility. The park, which will be located on the old Meyers Farm property will be approximately 3 acres in size while the remaining five acres will be preserved as open space. Councilman Cook voted no on the deal because of concerns related to the high density that is allowed as a result of this deal (20 units to the acre) and potential precedent that may be set in the future. In addition Councilman Cook is opposed to using open space taxpayer funds as part of the TDR deal.  The other four Town Board members (Petrone, Cuthbertson, Berland, Mayoka) approved the resolution essentially agreeing that a future precedent is not possible.

In another action the Town Board shot down the highly discussed Bamboo resolution in a 2-2-1 vote. Petrone and Berland voted in favor of the resolution while Cook and Cuthbertson voted against it and Mayoka abstained. The resolution if approved would have made a property owner, whose Bamboo had migrated to another property, responsible for rectifying the matter through a series of measures to stop the spread including trenching and barriers, and a range of fines.