June 25, 2012 8:19 am | Filed under: Around Town,Code Enforcement,Investigations,News | Posted by: The Huntingtonian 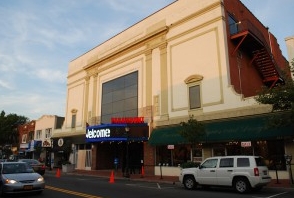 The recipient of the “Creating Great Places” award was the Paramount In Huntington Village.  According to Vision Long Island they were chosen for this award because “The Paramount plays a positive economic role, especially for local restaurants, the tourism industry and other nearby art facilities, by bringing upwards of 5000 visitors per week to Huntington Village. The theater itself is committed to developing a strong, mutually beneficial relationship with local businesses.  The Town of Huntington and the Long Island Rail Road worked with the theater to develop a parking management plan, part of which includes the ability to drive or take the train to the Huntington LIRR and take the free shuttle to the theater.”

The parking management plan includes the town authorizing the Paramount to take over public parking spots that are no longer to be used for purposes other than attending events at the Paramount.  This has become a problem for local stores and restaurants.  When residents spoke at Town Hall to express the problem, Frank Petrone and Susan Berland became defensive.

According to many local residents and business owners, the Paramount has had a negative effect on their business and quality of life.  It leaves them questioning why Vision Long Island selected the Paramount to receive this years Great Places Award.  Since the Paramount opened residents have been coming to Town Hall looking for help in improving the situation. Some of the commentary can be viewed here.

In November 2011, shortly after the Paramount opened, one local resident and business owner stated, ” right now we feel like we have been invaded and we are not Huntington anymore, we are the town of Paramount.”  This would be a direct contradiction to Vision Long Island’s claim that the Paramount is looking to develop a strong, mutually beneficial relationship with local businesses.  Another contradiction is that Paramount workers have refused to let patrons of village businesses park in public spots so they could pick up take out or dine at a local restaurant.

Some claim that since the Paramount opened the Village has experienced a significant increase in noise, the streets have more trash, and there is increased pollution from the shuttle buses.  With certain acts, streets have been filled with drunk people throwing bottles down.

Since the Paramount opened in the village, parking has become a tremendous problem causing a negative economic impact on many local businesses.

Huntingtonian reporters interviewed businesses in Huntington Village and left survey’s for some. 80% of the people responded that business was down significantly. Some claim they are down by $20,000 per month. Others expressed losing as much as 50% of sales.  They cited the reason as mostly related to parking problems.  In some cases the type of venues booked by the Paramount cause some to avoid the village.

Many business owners were happy to give us information but reluctant to have us use their name because of fear of retaliation by the Town.  (This is a statement that we hear over and over from residents of the town of Huntington).

Some believe that crime and use of emergency personnel  has gone up in the Village since the Paramount opened and that it has been costly to taxpayers. 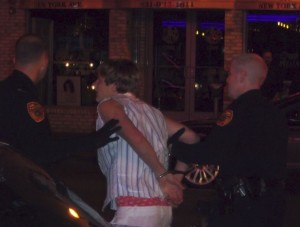 Just after the New Year 2012 began  at approximately 1:00 am, a 23 year old male from East Northport fell from a balcony at the Paramount Theater in Huntington Village.  He was air lifted to Stony Brook Medical Center and was listed in critical condition.

On March 3rd 2012, during a Barstool Black Out event at the Paramount , 5 teens were transported to Huntington Hospital and 3 were arrested for various crimes. The crowd of hundreds were drunk and very disorderly.  The situation spilled onto the streets of Huntington Village. The incident was dangerous and costly to taxpayers. 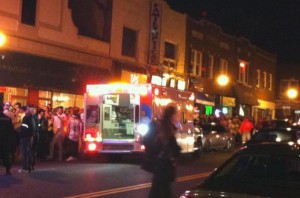 March 6th Supervisor Petrone issued this statement: “Supervisor Petrone is very concerned by what happened at the Paramount Saturday night and will be meeting with Suffolk County police, the Town’s public safety director and the Paramount’s operators to discuss the situation. “This is not the type of activity we anticipated, nor will it be tolerated. I want this kind of activity to cease,” he said”.  Only 2 months later Petrone applauded Vision Long Island for selecting this business to be honored.

Perhaps down the road the Paramount has the potential to have a positive impact on the surrounding community but it has many kinks to work out.   It is possible that they will work things out and eventually become an asset to the local residents and community but they still have a way to go.  Vision Long Island seemed to have  disregarded the facts and gave little consideration to the surrounding merchants and residents.

The following statement is the way Vision Long Island describes its’ values: Smart Growth favors mixed-use, mixed-income development that is attractive and strategically designed to enhance the greater area. Smart Growth reduces traffic by making transit, walking, and biking realistic and pleasant options, thereby contributing to community health, safety, and vitality. It embraces clean energy and sustainability by design. It focuses on infill, redevelopment, and open space preservation in order to create more livable places conducive to a variety of transit options.

2 Responses to Smart Growth Award Leaves Some Scratching Their Head