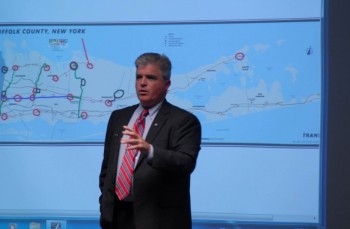 After months of meeting with business leaders, officials at all levels of government and regular families, Suffolk County Executive Steve Bellone today announced his economic development plan to create jobs and tie together projects taking place throughout our region.  Bellone’s plan lays the groundwork for long-term economic growth in Suffolk County as well as the Long Island region.

Bellone’s plan complements Suffolk County’s assets, such as world-class educational and research facilities and major infrastructure improvements in the pipeline, including the Second Track, by emphasizing the need to connect vibrant downtowns, allow for improved North-South transit connections and create opportunities for innovation companies to locate and grow in Suffolk County.  Bellone announced that coordinating the efforts of all levels of government, research institutions and the private sector to implement this plan will be the top priority of the Suffolk County Department of Economic Development and Planning.

“There are great things happening in Suffolk County, but they are happening in isolation,” County Executive Bellone said.  “Today, I am directing the Department of Economic Development and Planning to bring those pieces together and connect the efforts of all levels of government and the private sector.  To grow Suffolk’s innovation economy and create good paying jobs, we need to make sure businesses coming out of our research hubs have places to locate and grow and that workers can live in vibrant downtowns which are connected to one another.”

County Executive Bellone highlighted the positive steps already underway in our towns and villages to create transit oriented development, vibrant downtowns and walkable communities which are all attractive to younger populations.  In addition, Suffolk County is the home to world-class research and educational institutions as well as international companies such as CA Technologies, Motorola and Canon.  Bellone noted that while many areas of the country would be envious of Suffolk County’s assets, growth has been slowed by a failure to work together.  That is why, working together with the Suffolk County Legislature, Bellone created the Department of Economic Development and Planning earlier this year to coordinate Suffolk County’s economic strategy.

Among the details of Bellone’s Connect Long Island Plan:

•           Sustainable growth requires coordinated land-use planning.  Land use needs to be considered on a regional basis as to where it makes sense to develop and attract new business with the goal of ensuring connections to mass transit.

•           Focus infrastructure investments on connecting existing and proposed developments by expanding mass transit service and reverse commuting.  The acceleration of the second track between Farmingdale Train Station and the Ronkonkoma Hub is a critical component to other current and proposed transit oriented developments along the line which help promote additional economic development and activity. Along with the Republic/Route 110 Corridor project, the second track project is also critically important to other transit oriented developments such as Wyandanch Rising, the Heartland Project and the Ronkonkoma Hub.

•           Invest in North-South mass transit connections.  North-South transit connections provide untapped potential to drive economic growth in Suffolk County.  The current study underway analyzing Bus Rapid Transit (BRT) along the Route 110 corridor, which is home to 135,000 jobs, is much needed and would greatly improve access to the area, creating new opportunities while also easing traffic congestion. Studies indicate that BRT is not only feasible, but existing right-of-ways can be utilized to create dedicated BRT lanes. In the future, BRT lanes on the Sagtikos Parkway can provide a connection to the Deer Park Train Station, the Heartland Development, King Park Train Station and existing downtowns and a BRT lane along Nicolls Road can provide a connection to Stony Brook University, Suffolk County Community College’s Selden campus and Patchogue Village.

•           Suffolk County is home to global research institutions such as Cold Spring Harbor Laboratory, Brookhaven National Lab and Stony Brook University.  However, currently there’s a lack of a regional plan to ensure that companies that emerge from these institutions have an opportunity to locate and grow locally.  Bellone’s Innovate Suffolk initiative is designed to attract, retain and grow clusters of businesses around existing and enhanced transportation corridors, research institutions and municipal land, while creating high-paying jobs in industries such as high-tech, biotechnology, pharmaceuticals and information technology.

•           Collaborate with current initiatives and programs such as Accelerate Long Island which will assist in the creation of an entrepreneurial ecosystem where the potential of research at the aforementioned institutions is harnessed by entrepreneurs who start-up companies and create jobs on Long Island. It will increase commercialization of research, promote entrepreneurship, and foster business creation and retention on Long Island.