June 27, 2012 7:57 am | Filed under: Around Town,Arts & Entertainment,Huntingtonian Junior | Posted by: The Huntingtonian

Brendan Morrow is a contributer for The Huntingtonian. Brendan just finished his freshman year at Hofstra University where he is studying Communications. He is 18 years old, a life long resident of Huntington Bay, and loves to write about and discuss television, film, and the entertainment industry. 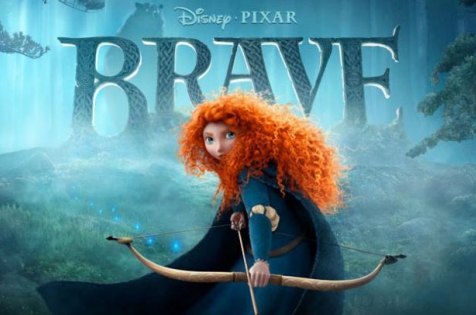 For seventeen years now, Pixar Studios has been releasing the absolute best animated films out there. Year after year they bring us something we’ve never seen before, from two robots finding love to an old man flying a house with balloons. For a while, it seemed like they could do no wrong. That is until last year, when Cars 2 was a commercial success but a critical failure, aimed mainly at younger kids and not necessarily audiences of all ages. For the first time in Pixar’s history, a movie of theirs was excluded from the Best Animated Film category at the Oscars. So going into Brave, their newest animated feature, long time fans hoped that the studio could redeem themselves, and bring us another instant classic. Did they?

Well, not quite, but Brave is still a step back in the right direction for Pixar. In this newest film we follow Merida (Kelly Macdonald), a young princess living in a far away Scottish kingdom. She has all sorts of expectations placed on her by her mother, Queen Elinor (Emma Thompson), but she has no interest in becoming a queen herself. She’s a free and independent young girl, reminiscent of Ariel from The Little Mermaid, confined by the responsibilities that come with her status as a princess. One day, three royal families come to visit Merida’s town of DunBroch, with the sons intending to win her hand in marriage. She finds the idea of being wed to any one of these men against her will appalling, and yet her mother won’t budge. Merida, heartbroken, runs off into the forest, where she happens upon a mysterious old witch, who offers up a spell that might allow young Merida to finally change her fate.

From a visual standpoint, Brave is absolutely, breathtakingly gorgeous. Pixar’s beautifully rendered landscape shots are so magnificent that at times they actually border on being photorealistic. This technology has really come a long way since Toy Story. Even the smallest visual details look great, like Merida’s long, curly hair, which seems to have a life of its own, constantly bouncing around throughout each shot. The attention to detail paid to every frame of Brave is staggering, and even if nothing else about the movie worked, it would be worth seeing for that aspect alone.

The film’s screenplay, written by Mark Andrews, Steve Purcell, Brenda Chapman and Irene Mecchi is solid, though not quite as great as previous Pixar scripts like Wall-E. Where Brave is strongest is in the mother-daughter relationship between Merida and Elinor, and luckily this is the main heart of the film. It’s well developed and believable, making the emotional payoff in the last act very satisfying. Pixar movies have always had a good sense of humor, and Brave does have its fair share of laughs, though few gags will probably stay with you after leaving the theater. Actually, what’s refreshing about Brave is that it treats the central conflict, and characters, somewhat seriously. There are real, emotional stakes, and not everything is played for a cheap laugh like in some other children’s films, which rely far too much on slapstick and not enough on characters.

I hesitate to call Brave disappointing, because really this is a well made and effective movie on its own terms. The problem, though, is that we know Pixar is capable of so much more than a simple assortment of standard, fairy tale tropes. Here is a studio which gives us something we’ve never seen before every single time around. What’s exciting about these movies is that we never get the sense that the writers are adhering to any sort of rules. They’re venturing off into new, unexplored territory.

The same can’t be said for Brave, which seems to follow very specific rules of the princess fairy tale genre. How many Disney movies follow a rambunctious princess boxed in by her family? Granted, Brave does have a unique Pixar spin put onto it, and we don’t often see a mother-daughter relationship this well developed, but for the most part anyone who is remotely familiar with classic Disney movies will feel they’ve seen this story several times already. That doesn’t make the movie bad, necessarily. Recently, the Disney film Tangled was a very standard and predictable fairy tale story, and yet it was one of their better films of the past few years. Brave stacks up with Tangled, and is a perfectly enjoyable animated film, but “standard and predictable” are not adjectives typically used to describe a Pixar film, until now.

Still, even if a tad disappointing for long time fans, Brave is an effective and enjoyable family film which I would recommend to anyone, especially for families. It’s just lacking some of that Pixar magic, mainly because the central thrust of the story is so familiar and somewhat stock. But like always, the characters and heart are there, even if the storyline isn’t anything special. Perhaps not every film of Pixar’s needs to revolutionize the genre, though. Sometimes there is room for a pleasant, if a bit safe, princess fairy tale story reminiscent of classic Disney animation. In that way, even though Brave does not reach the grand heights of the Pixar canon, it succeeds at what it’s trying to do. I just wish it were trying to do a bit more.