The renovation of the Suffolk County Vanderbilt Planetarium has just taken a major step forward with the installation of its centerpiece, a state-of-the-art star projector. Technicians from Japan are installing the Konica Minolta Infinium projector and its related full-dome video and surround-sound systems in the recessed “pit” in the center of the planetarium theater. The projector was fabricated to the Vanderbilt Planetarium theatre’s specific configuration and technical requirements. 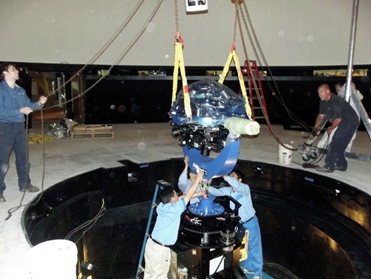 When the planetarium reopens in late October 2012, it will be on one of the most advanced facilities of its kind in the United States. Suffolk County has invested $3.6 million in the project.

The museum has raised $145,000 in private funds that will cover the cost of painting; part of the purchase of new carpeting and 236 ergonomically designed planetarium theater seats; an online reservation and ticketing system; and the redesign and modernization of the museum gift shop.

The Vanderbilt Museum partnered with The Home Depot of Huntington, NY, to purchase the carpeting for the planetarium theatre and lobby at a significant discount. As an in-kind donation, The Home Depot is generously absorbing the cost for the removal/installation of the carpet.

The Suffolk County Department of Public Works and its subcontractors have made extensive renovations to the building’s infrastructure and mechanical systems and to the planetarium theatre. County Executive Steve Bellone recently approved Legislator William Spencer’s resolution for an additional $300,000 to fund  necessary heating, ventilating and air-conditioning system renovations, which will yield significant operational and energy savings and will enhance the comfort of the public.

Lance Reinheimer, interim executive director of the museum, said that, in addition to offering audiences an “exhilarating, immersive experience,” the new facility is being designed as a flexible venue for lectures, performing arts and large-group meetings. In addition, the planetarium will generate jobs.” The new, improved planetarium will create 6-10 new jobs and, as an income generator, will be vital to the Vanderbilt’s plan for economic sustainability.

Legislator William Spencer said, “The Vanderbilt Planetarium renovation is well underway, and we’re excited that it will once again become a very popular destination for Long Islanders as well as for visitors from all over the region. The state-of-the-art Konica Minolta star projector will make our facility one of the finest in the country. Suffolk County is very proud to make this possible.”

The original planetarium seats and carpeting have been removed. The “pit” — the circular, low-walled space in the center of the theatre where the original Goto star projector was located — has being reconstructed to accommodate the new projector and an elevator that will allow the projector to retract below audience sight lines. This feature, along with removable rows of seating, will provide flexibility for the planetarium theater to become a multiple-use venue. This feature will allow the museum to expand its audiences, visibility and regional appeal, and will broaden its ability to generate income.

Professional museum staff will develop live lectures and accompanying programs that replicate the night skies over Long Island. To coincide with those programs, the Vanderbilt — one of the few planetariums with its own observatory — offers night sky observation, weather permitting, with its 16-inch Cassegrain telescope.