July 3, 2012 10:42 am | Filed under: Around Town,Code Enforcement,Huntington Station,Investigations,News | Posted by: The Huntingtonian
Many residents have expressed concern regarding the ongoing activities at the Avalon Bay Huntington Station site, in particular as it relates to soil disturbance activities. We first reported major deficiencies at the site in a June 27th article as certain soil mitigation measures were not being implemented although they were required according to the soil management plan. Phone calls were made to New York State Department of Environmental Conservation (NYSDEC), the Suffolk County Health Department and emails were sent to Legislator Spencer, Damaro’s office and to Town Spokesperson AJ Carter.  We specifically asked for support and their comments regarding the possible health issues of the contaminated soils.  There was no comment from Spencer, D’Amaro or Carter and our requests went unanswered. The NYSDEC said that they would contact the Town to investigate the matter.  Essentially, all parties referred us back to the town. 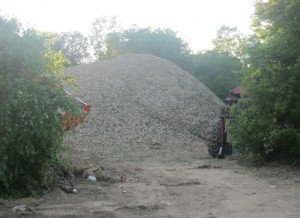 On the evening of July 2nd, Dan Fucci, who is a Certified Professional in Erosion and Sediment Control looked at the site from 5th Street and reported that progress is being made.  Mr. Fucci reported that a six foot high chainlink fence and a corresponding silt fence is being installed as per the approved plans. Additionally the site ingresses and egresses are being stabilized with filter fabric and stone. On the evening of July 2, a dust control vehicle was on the site and the catch basins in the area were protected.

A hazard that remains unaddressed is the large pile of wood mulch on the site. The developer should take all precautions to ensure that the pile does not combust and cause a dangerous fire, especially with the dry weather conditions that are occurring.  The Huntingtonian will continue to monitor the site in order to ensure that the developer is in compliance with their approved plans in order to provide maximum protection to the public and water quality. 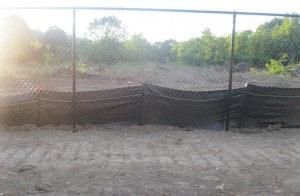 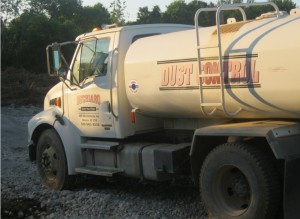 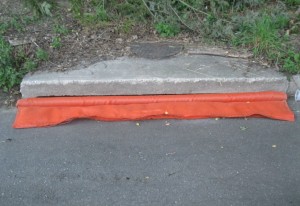