Town Acts on Fishing Boat That Sank in Huntington Harbor 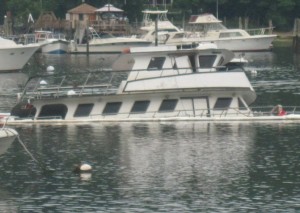 The Town of Huntington has issued three summonses to the owner of a fishing boat that sank last week in Huntington Harbor and has been working with the owner on the removal of the vessel while containing any possible environmental damage.

The 56-foot Noli Eileen sank last week, despite efforts of Town Bay Constables to keep it afloat. The reason for the sinking is under investigation. At the time of the sinking, the owner of the boat, Peter Gens of Kings Park, reported that it contained hydraulic oil and fuel estimated to total about 15 gallons. To contain any possible spill, the Bay Constables put an absorbent boom around the boat and have been monitoring the boom during each shift.

On July 5, the Bay Constables issued three summonses — for pollution of waterways, unseaworthy vessel and an expired mooring permit — and a notice of violation requiring the owner to correct the situation within three days. The Town has also notified the U.S. Coast Guard and the New York State Department of Environmental Conservation.

Today, Senior Harbormaster Harry Acker spoke with the attorney for the owner about its removal from the Harbor.  Should those discussions prove unsuccessful, the Town will consider removing the boat and seeking reimbursement from the owner.

The boat, once a popular fishing vessel, has been moored in Huntington for several years. It is believed that it has not carried passengers since 2008.