July 11, 2012 9:04 am | Filed under: Around Town,Asharoken,Investigations,News | Posted by: The Huntingtonian Staff 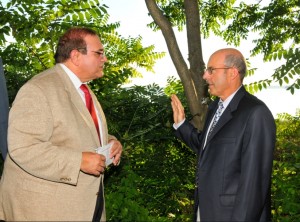 In one of his first actions as the new Mayor of Asharoken, Dr. Greg Letica appointed the longtime former Deputy Supervisor for the Town of Huntington Laure C. Nolan as Village Attorney.  Additionally the Village Board approved a residency resolution that states the following: “Resolution (2012-34) Be it Resolved that any Residency Requirement for compensated Village officials, officers, appointees and employees is waived.”

Ms. Nolan is the temporary Village Attorney until a permanent appointment is made.  Ms. Nolan is also under contract with the Town of Huntington to provide legal services within the Town Attorney’s office. She is representing the town in the LIPA tax challenge issue that is ongoing in Northport.  She is currently collecting a pension from her former position as Deputy Supervisor.

Speculation is increasing regarding Supervisor Petrone’s involvement in the recent mayor’s race.  The recent appointment of Ms. Nolan and lifting of the residency requirement have fueled those speculations.  The Petrone administration is one that is regularly accused of  unyielding support for builders and other special interest groups.  The autonomy of the villages allows the local government to control their own zoning changes and code enforcement.  Some questions have arisen lately about the town of Huntington influence over the Village of Northport.

Sources tell us that Supervisor Frank Petrone played a role in the recent election where former mayor Patricia Irving was defeated.  There is a history that exists between the former Mayor and the Huntington Town Supervisor.  When Pat Irving was first hired as Deputy Superintendent of Highways in December of 2010, the Town Board would not confirm the appointment. The money to support the position was reappropriated out of the Highway budget to be controlled by the Town Board.  Irving worked a number of months unpaid. 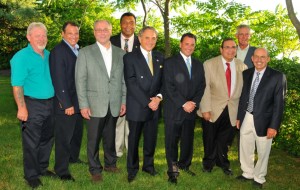 Facing mounting  pressure from an imminent law suit, the town ultimately passed a resolution approving her appointment in March 2011.  At this point Supervisor Petrone  filed a lawsuit against Irving claiming that it was a conflict of Interest for her to be the Mayor of Asharoken and Deputy Highway Superintendent.  The lawsuit essentially claimed that it is unlawful for an official to hold both positions at the same time because each individual jurisdiction is located within the same Township.  There are many appointments throughout the Township that would appear to have the same conflict of interest. Petrone has not seemed to be disturbed by this. Irving at that time fired back that the Supervisor was wasting taxpayer money on the lawsuit.   To date, Irving is still Deputy Superintendent of Highways.

Town Supervisor Frank Petrone played a major role in the swearing in ceremony of the Asharoken Mayor and Trustees.  This is something he has not normally done in the recent past.  He presided over the ceremony and addressed those who attended.  One week later, at the swearing in of Huntington Bay Mayor Herb Morrow, Supervisor Petrone was not present.  Speculation continues to grow as to why the Supervisor seems to have an interest in the Village of Asharoken.
Photos by Steve Silverman
Facebook Comments must be signed into Facebook