The Bee Gees: A Tribute to Robin Gibb 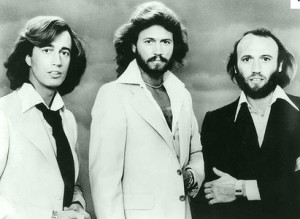 A celebration and exploration of the legendary band of Australian brothers, with rare performances of The Bee Gees compiled and hosted by Freeport music archivist Bill Shelley, will screen with discussion and reception to follow on Tuesday, July 24 at 7:30pm at the monthly Rock Legends Live! series at Cinema Arts Centre, 423 Park Ave, Huntington. 631-423-7610 www.CinemaArtsCentre.org

$10 Members / $15 Public / Includes reception. Tickets can be purchased online, www.CinemaArtsCentre.org at the box office during theatre hours or by calling Brown Paper Tickets at 1-800-838-3006

In the 1970s, The Bee Gees rocketed to the stratosphere of music stardom with their iconic Saturday Night Fever soundtrack, and became icons of Disco. However, a deeper look at this famed band reveals a much richer and complex musical legacy. The Bee Gees had their own television show when they were still teenagers. These Australian singer-songwriter brothers so impressed producer Robert Stigwood (who also produced Eric Clapton and Cream) that he took them on as clients. They soon became famous for their great harmonies. Their songs range from soft love ballads to political stories to disco classics, and even fully-orchestrated symphonic rock.

This program will celebrate it all, especially offering a tribute to Robin Gibb, whose sad loss leaves only Barry out of this talented musical family. Among the many songs that will be featured are “Lonely Days, Lonely Nights,” “New York Mining Disaster 1941,” “Words,” “Jive Talking,” “Nights on Broadway,”  “Stayin’ Alive,” “How Do You Mend a Broken Heart,” “You Should Be Dancing,” “Massachusetts,” and many more!

This show brings together a variety of rare performances from concerts, television performances, promotional videos, and studio rehearsals. See the original line-up and remember why people still enjoy listening to the brothers Gibb, known to us as the Bee Gees (“B” “G’s.”). Enjoy watching and listening to Maurice, Robin and Barry, with some footage of Andy Gibb as well. Watch performances from their big sound track album of Saturday Night Fever (that sold millions of albums and pushed The Bee Gees to the top of the charts) and rediscover the qualities that made this group so popular.