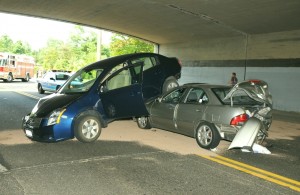 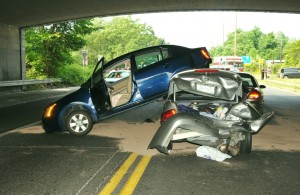 The Dix Hills Fire Department, Commack Fire Department, Commack Volunteer Ambulance Corps and Suffolk Police responded to a five-car pile-up on Commack Road underneath the overpass for the Northern State Parkway, Saturday, July 14, at about 3:44 p.m. The chain-reaction crash closed Commack Road and resulted in a fuel spill which was handled by Commack and Dix Hills firefighters.  Two occupants suffered non-life-threatening injuries and were transported to area hospitals by Dix Hills Rescue and Commack Ambulance. Dix Hills FD dispatched a heavy rescue truck, two ambulances, paramedic and first responder units, under command of Chief Richard Granahan. Commack FD was on the scene with two engines and a heavy rescue truck, under command of Chief Kieran Keane. About 40 fire/rescue personnel were at the scene.