Much has been discussed lately regarding the Town of Huntington’s bond rating and it’s future implications so we at “The Huntingtonian” feel compelled to research the matter and come to some conclusions regarding this very important financial issue facing the town.  First off, Bond Ratings are important because after being hired by the company or municipality to rate a bond, the bond rating company evaluates the financial condition of the company or municipality as well  as the structure of the bond. They determine the issuer’s ability to pay the  interest payments and their ability to repay the face value of the bond when the  bond matures. Based on this analysis the bond rating company issues a rating.  Each of the three main bond rating companies (Standard and Poor’s, Moody’s and Fitch) has it’s own rating system. A bond rating gives investors important information about a bond and its issuer and allows investors to make an informed decision when deciding whether or not to buy a bond. Bond ratings have become essential tools that  investors rely upon when analyzing bonds. 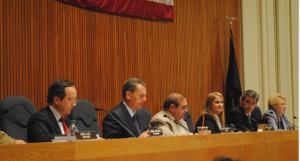 The Town issued press release supplied comments from Supervisor Petrone, Councilman Cuthbertson and Councilwoman Berland. According to the release which was prepared by AJ Carter, the Town’s Public Information Officer, Supervisor petrone stated “The bond agencies’ ratings validate the way I have managed Town finances since becoming supervisor 19 years ago, We have reduced the amount of the budget devoted to debt service, controlled spending, held taxes down and put together spending plans that look beyond the current year. As the rating agencies note, the Town continues to manage its finances conservatively, both currently and looking ahead, by making the tough decisions while at the same time maintaining vital and desired services.”  Councilman Cuthbertson stated that “These decisions by the rating agencies directly refute those who have said the Town is facing a fiscal crisis. The ratings show that both in the past and looking forward, the Town’s finances are in good order and in good hands.” Councilwoman Susan Berland said, “A government should be judged by how it responds in difficult times. As the reports from the rating agencies show, this government has risen to the challenge of difficult economic times by making the hard decisions that hold down taxes and maintain services while keeping the Town on sound financial footing. We are pleased that the recognition of these efforts — maintaining our AAA bond rating – will hold down debt service costs for years to come.”

Somehow Councilman Mayoka and Councilman Cook were overlooked in the press release so we contacted them for their thoughts on the issue which are stated below.

Councilman Mayoka says ” I am deeply concerned with the numerous weaknesses pointed out by the ratings agencies. The agencies stated that we have a 2 million dollar shortfall in our 2012 budget and a 5 million dollar shortfall in our 2013 budget. Our reserves have fallen by over 40 million dollars over the last 5 years! I think that qualifies as a crisis.  As my colleague pointed out at the last town board meeting I have been ahead of the curve and called this crisis well before I was elected. If we as a town board fail to stem the bleeding then we will lose our coveted bond rating.  We are looking at a fiscal cliff that can not be ignored”

Councilman Cook says“I am thrilled that the three major credit rating agencies have upheld our AAA bond rating, in these challenging times.  I truly believe the open dialogue that the Town Board has maintained will continue to enable us to navigate these difficult economic times.  It is the questions that we raise that allow us to explore and discuss how to address the declines in “economically sensitive revenues” and allows us to make a plan to address any possible budget gaps.  Now we need to focus on the 2013 Budget, and I look forward to partnering with Supervisor Petrone and the Council Members to continue to maintain services while holding a tight reign on taxes and debt to allow Huntington Taxpayers the peace of mind that they should expect from their Town Board. “

So with all this said what did one of the Bond Rating agencies (Standard and Poor’s) indicate? This agency has affirmed the Town’s AAA Bond Rating with a stable outlook going forward.  They also state that the leading taxpayer in the town is LIPA which equates to approximately 11% of the towns tax rate.  In 2010 LIPA filed a tax certiori challenge and if successful, Town management stated that they will raise taxes to offset the tax loss.  They also mention that the 2013 budget process has commenced and currently a 4-5 million dollar deficit exists for that year upon which the town is exploring ways to close that deficit. Even though the Town closed the 2011 books with a 2.4 million dollar surplus that was accomplished by utilizing nonrecurring “one shot” revenue sources such as through the sale of properties, etc.  According to Standard and Poor’s this is considered a credit risk. This type of activity of utilizing “one shot” revenue sources is what, in part,  precipitated the budget crises in Nassau County.  Another note of concern mentions how as of January 1, 2011 the towns post employment liability was $190 million and is entirely unfunded.