August 9, 2012 4:52 pm | Filed under: Asharoken,Government,Investigations | Posted by: The Huntingtonian 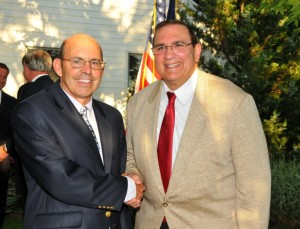 At a recent Asharoken Village Board of Trustees meeting, Mayor Letica appointed Bruce W. Migatz as Village Attorney for a one year term ending July 2013.  The new Attorney will recieve a $30,000 annual retainer, which will be payable in equal amounts of $2,500 per month.   The retainer covers only general legal advice.  In addition, any legal services the new Attorney provides to the Village, such as litigation procedings, arbitration, etc. will be billed as a separate expense, at a rate of $300 per hour.  Former Town of Huntington Deputy Supervisor Laure Nolan will continue in her capacity as Asharoken Village Special District Attorney at a reported rate of $200 per hour. Furthermore, she is currently under contract with the Town of Huntington working on the LIPA tax certiari issue and she is also collecting a New York State pension.

Mr. Migatz, a Port Washington resident, currently works for the law firm of Albanese & Albanese, which is located in Garden City.  According to his Bio he was a former Chief Deputy Town Attorney for the Town of North Hempstead and a former Manorhaven Village Attorney. Additionally he serves on the Board of Directors for Vision Long Island, which is headed by Eric Alexander. Vision Long Island is a controversial organization that promotes so called “Smart Growth” initiatives across Long Island that include “high density housing”.

Recently the new Asharoken Mayor dropped the residency requirement for Village Officials, thus, paving the way for non residents to attain appointed posts within the Village.