Has It Been A Year Already?

The online edition of  The Huntingtonian went live on August 10, 2011, one year ago today.  Our staff would like to take this opportunity to thank all who have supported our newspaper which now reaches more than 38,600 visitors online and our print edition reaches 20,000 local households. We are grateful to our readers, advertising sponsors and contributors for your continued support.

The following are the top 5 stories of the year in terms of online reader views:

#1. I Am There Every Day, Strong, Caring & Capable

My name is Jessica I am a teacher in town.  I was hired by a local district in 2004.  I have taught at two local schools.  I have taught kindergarten, 1st grade, 2nd grade, math support, and reading support.  I love what I do.  And I have been excess-ed three times.

Excess-ed means laid off.  Let go.  It is an embarrassing, crushing experience and my colleagues and I have to face it year after year after year.  We are told not to take it personally, but that feels like an impossible task.  I am here because every time I go through this, I practice a version of this speech in my head.  I feel as though it is time that the board and the community hear it.  I am sure that it is not an easy task to consider terminating people’s employment but maybe if you know first hand what it feels like, you will be motivated even more to try and find alternative solutions to our schools’ financial dilemmas. 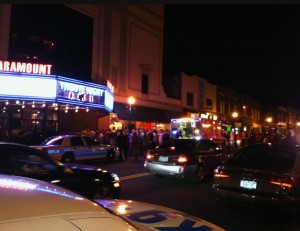 Facebook and other social media sites were buzzing with comments surrounding an event held March 3rd at the Paramount Theater on New York Avenue in Huntington Village.  According to eye witness reports and phone calls we received from neighboring local business owners, the event was a costly and dangerous situation for the local community.  This should have come as no surprise when one considers the event that was booked for Paramount that evening.  There is a new trend in wild partying called Barstool Blackout Tours (warning: images may be inappropriate for children).  In a nutshell, these parties are intended to be outrageous, over the top events for a young people to attend.  Their websites and blogs provide details.  The Paramount made the decision to introduce this event to the quaint local community of mom and pop businesses of Huntington Village and the results should have come as no surprise. 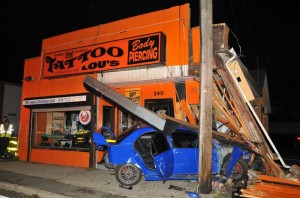 The Huntington Manor Fire Department, Huntington Community First Aid Squad and Suffolk Police responded to the scene of a two-car collision that sent a Mitsubishi sedan careening through the front of Tattoo Lou’s shop on East Jericho Turnpike near Engelke Avenue in Huntington Station, Saturday night, March 31, at about 9:45 p.m.  Four occupants from the vehicles involved suffered non-life-threatening injuries and were transported to Huntington Hospital by the first aid squad. Huntington Manor firefighters assisted in removing two occupants from the building that were not injured, however the building sustained significant structural damage. About 40 firefighters and EMS personnel were on the scene with two engines, two heavy rescue trucks and three ambulances.

# 4. Were Laws Broken? Sounds Like Back Room Deals? Caught on Tape

The Huntingtonian was trying to obtain information regarding the rental registration law as required by Town Code (see below).  We believe the law was passed with legislation in 2002 and recently amended to include Section 8 dwellings which were previously excluded.  We were under the impression that there was supposed to be some sort of a list available of all non-owner occupied rentals in the Town.  In trying to ascertain the facts regarding the rental registration laws, we began to submit FOIL requests and ask questions.  Ken Lindahl who is the Director of Public Safety was not familiar with such a list.  AJ Carter would not commit one way or another if such a list existed.  Glenda Jackson and Susan Berland seemed confused by our request and said they didn’t think there was such a law.  After playing our usual game of  Freedom of Information Wack-A-Mole with AJ Carter, there was a strange turn of events. In early October of this year A.J. called one of our editor’s cell phones to yet again clarify what we were asking for.  When there was no answer on the cell phone, AJ left a message and then hung up, or should we say, he thought he hung up. We know that its not really a tape per se but a digital recording. Some habits are hard to break. 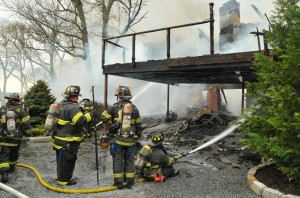 Volunteers from the Huntington Fire Department were dispatched to battle a raging house fire on Hawk Drive in the Village of Lloyd Harbor, Saturday, March 24, at 3:43 p.m.  Upon arrival, firefighters found the two-story waterfront home fully involved in flames, and began an exterior attack with handlines and aerial ladders.  Mutual aid assistance was requested from the Huntington Manor, Halesite, Cold Spring Harbor and Centerport Fire Departments, with the Huntington Community First Aid Squad providing EMS support.  About 80 firefighters using 12 pieces of apparatus had the blaze controlled within 1-1/2 hours. Crews remained on the scene dousing hot spots and overhauling the collapsed structure until 10 p.m.  Flying embers caused minor damage to the roof and deck of two neighboring homes, and were quickly extinguished by firefighters. Units were under the command of Huntington Fire Chief Ken Cochrane, supported by Assistant Chiefs Bob Berry and Rob Conroy. There were no injuries reported, and the fire is under investigation by the Lloyd Harbor Police and Suffolk Police Arson Squad.