Brendan Morrow is a contributor for The Huntingtonian. Brendan is in his sophomore year at Hofstra University where he is studying Communications. He is 18 years old, a life long resident of Huntington Bay, and loves to write about and discuss television, film, and the entertainment industry. 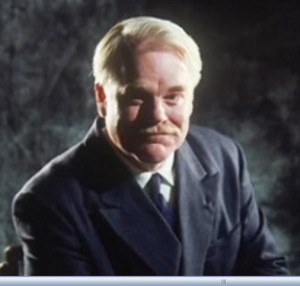 Paul Thomas Anderson’s The Master is a monumental cinematic achievement, and one of the year’s best films, even if the experience of watching it can at times be somewhat frustrating. This is the exact opposite of a crowd-pleaser, a movie that seems almost designed to angrily provoke and leave us uncomfortable as the credits roll. At the end of my packed screening, the majority reaction among the audience seemed to be of defeated confusion. One man a few rows down stood and exclaimed, “Can someone explain what that was about?”

Here is a movie that asks us not to sit back and enjoy, but to lean forward and remain an active participant in unraveling its meaning. At times it’s unnecessarily esoteric, yet never for a second boring or unambitious. While the basic storyline is simple, the characters are enigmatic from start to finish. Anderson consistently keeps us on the outside as a distant observer, often puzzled. And like the title character, the movie casts a spell over us. By the time the credits arrive, we feel as if we’ve been forcibly shaken from a powerful trance.

The Master revolves around a religious cult, apparently based loosely on the Church of Scientology, known as The Cause. Its leader is Lancaster Dodd (Phillip Seymour Hoffman), often simply referred to as Master. He’s a charismatic intellectual who amasses dozens of followers with his strange theories about past lives, but it quickly becomes clear this is all a sham. Does even he believe what he’s saying? It isn’t quite clear. A drunk, mentally disturbed Naval veteran, Freddie Quell (Joaquin Phoenix), stumbles upon the Cause while searching for work, or at least a place that will accept him. He forms an unexpected bond with Master, and becomes further and further entrenched in The Cause as the organization continues to spread across America.

Paul Thomas Anderson’s last and greatest film, There Will Be Blood, was an unforgettable journey into the dark corners of American capitalism and extreme religious devotion, but at its core it was simply the story of a man, Daniel Plainview. Similarly, The Master speaks to mankind’s need for control, and the conflict between our intellectual and animalistic natures, yet as the Master himself tells Freddy, “above all else I am a man.” The Master is the meandering, confused, almost psychotic story of two men, told to us through a warped perspective, as if we are being brainwashed as the movie progresses.

Joaquin Phoenix as Freddy provides us with one of the most memorable on screen performances since Daniel Day Lewis in There Will Be Blood. It must be seen to be believed. One sequence, an astonishing ten or fifteen minute scene in which Freddy undergoes psychological evaluation, is absolutely stunning, and will almost certainly be studied in drama classes for years to come. Phillip Seymour Hoffman’s role isn’t as showy, but is just as captivating. We can’t take our eyes off him; each and every time he opens his mouth we anxiously await his next move. While a lesser screenwriting would make the Master out to be a complete nut, Anderson allows us to actually sympathize with him and his cause, as crazy as it is.

You might not expect this, but The Master is the most beautiful looking film of 2012. Each and every frame is thoughtfully composed, and any individual screenshot could make for a gorgeous looking desktop wallpaper. The film was shot in 70mm, a format normally used for films grand and epic in nature (last implemented in Kenneth Branau’s Hamlet.) And while The Master’s most compelling sequences mainly consist of characters sitting in rooms talking, I have no hesitation describing it as epic. You’ll appreciate the true beauty behind well-composed cinematography like never before.

Clearly, The Master is a worthy addition into Paul Thomas Anderson’s impressive canon, but There Will Be Blood remains his masterpiece. I consider that film to be just about perfect, and one of the great American movies. The Master doesn’t quite reach those heights. Though for most of its run time the film is easy to follow, even if we can’t always sink our teeth into the characters’ motivations, the last half hour or so becomes a bit too enigmatic for its own good. Does this movie have a climax? Does it build towards anything? Not really. We are left unsettled and confused, and though the ending makes sense in retrospect when the film’s subtext and themes are considered, in the moment it’s rather anticlimactic compared to what came before.

I had also hoped for more of an exploration into the inner workings of The Cause. How exactly does a cult like this come about? What do they believe? We get some specifics, but not enough. And who are the followers? Aside from an interesting subplot with Laura Dern, many of them are basically extras, serving only as background scenery. What is going through their minds? Do they actually believe this stuff? How does The Cause spread? Further exploration into how a truly bizarre organization like this actually operates could have given the film the dramatic meat it needed. As is, the movie works because of the compelling emotional arcs, but it’s somewhat lacking in the story department.

The Master is truly a challenging film. After a certain point there is seemingly no clear dramatic arc, and the ending certainly doesn’t tie everything together in a nice package. It’s simultaneously intense and in your face, while also subtle and restrained regarding what it all means. To call this film unconventional would be an understatement; it’s borderline experimental. Yet at its core, this is a very compelling, beautifully told story about master and servant, and about a man searching for meaning encountering a man who offers it. Paul Thomas Anderson is one of the great living directors, and even if he may have peaked with There Will Be Blood, The Master still exemplifies he’s at the top of his game.