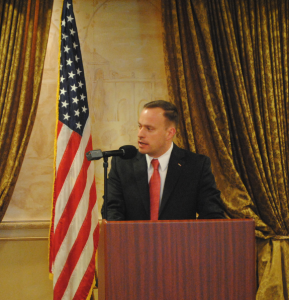 Stephen Labate, candidate for Congress in New York’s 3rd Congressional District, commented on today’s New York Post article about the mortgage scandal surrounding the sale of Congressman Steve Israel’s house.  “This is a classic example of politicians getting special treatment and playing by a different set of rules than the average citizen,” said Labate.

Stephen Labate, an Army Reserve Lieutenant Colonel and Iraq War Veteran, who this November is seeking to unseat Congressman Steve Israel, a six-term incumbent, pointed out that “Congressman Israel was an outspoken advocate for bailing out the bank that is now willing to let him off the hook for his mortgage obligation.   Every struggling homeowner on Long Island should be outraged by the clearly unethical behavior of the Congressman.”

Labate went on to say, “Many Long Islanders who face severe economic hardship due to unemployment or illness are losing their homes through foreclosure and are never afforded the opportunity of mortgage forgiveness from their mortgage holder.  There would certainly appear to be a double standard when a Congressman and his wife, who are gainfully employed with a combined income which exceeds $300,000, can walk away from their financial obligations.”

Labate continued, “The American people were rightly outraged when they learned of the perks that politicians received from Angelo Mozillo of Countrywide Mortgage. However, this scandal involving Congressman Israel is far more serious than anything that went on with the Countrywide scandal.  The constituents of the 3rd Congressional District should be asking themselves how can they trust Congressman Israel to understand the hardships facing the middle class when, unlike him, they can’t pick up a phone and negotiate their financial responsibilities away.”

“Voters are tired of elitist politicians who use the power of their office to garner special deals from the institutions they are charged with regulating,” said Labate.  “Long Islanders are ready to send a representative to Washington who will work for them and not abuse the power afforded to a member of Congress.”