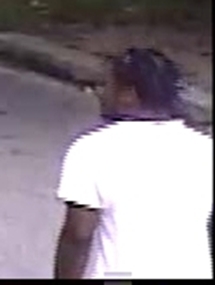 Two males were robbed and assaulted on New York Avenue in Huntington Station near Church Street.

On Wednesday, August 8, 2012, at approximately 1:50 p.m., an unknown suspect pulled two yellow metal chain necklaces off of a male victim. The second male tried to assist the victim, who is his brother, and the suspect knocked the second male to the ground and took $15 from him. The suspect, who fled eastbound on Church Street, is described as a black male who was wearing a white T-shirt and running shorts.

Suffolk County police have recently released surveillance photos of the incident.  Suffolk County Crime Stoppers and Suffolk County Second Squad detectives are seeking the public’s help in identifying and locating the person who robbed one male and assaulted another male on New York Avenue in Huntington Station.