October 17, 2012 8:03 pm | Filed under: Around Town,Government,Investigations,News | Posted by: The Huntingtonian 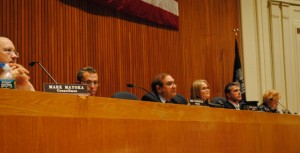 Residents that spoke out were most upset by the proposed 1200% increase in the parking garage annual permit fee.  The proposal would hike the fee from $50 to a proposed amount of $600. The residents stated that the proposal is completely out of touch with reality. A Centerport resident also stated, regarding the draconian fee increase “that perhaps its time to re-evaluate why I chose Huntington” to live.

Supervisor Petrone stated that surveys regarding the parking garage issue were sent to approximately 6000 residents. However many residents who spoke at last nights meeting claimed they never received such survey. Please find a link to the survey at: http://www.huntingtonny.gov/permit_pics/1439.pdf.

Meanwhile Anthony Ferguson of Huntington Station stated that ” the HART bus increase is over 50% of the fare. This is being done in a bad fiscal year; we are still in a recession.” The fees for HART ridership fares are proposed as follows:

The unlimited monthly ride passes for adults and students is proposed to be discontinued.

An issue that apparently irked many who spoke at last night’s meeting is the fact that salaries for the Town Board members and the Supervisor are slated to be increased all the while a proposed budget is submitted that inflict’s economic pain on many others.  For instance the Supervisor’s salary is proposed to increase by $4,360. This increase will bring his base salary to $162,903. Some even suggested that the present town board salaries are too high as it is.  Huntington resident Michael Kornfeld said that ” the Town Board should consider the idea of significant slashing of the Town Board salaries.” Mr. Kornfeld also referred to the notion that the position of Town Board positions were always meant to be part time positions.  The salaries for Town Councilmembers is slated to increase to $78,955. Councilman Mayoka then stated that he along with Councilman Cook have presented a counter proposal that would actually slash Town Board salaries by 10%. See article on the Mayoka/Cook proposal here.

Last night was the only public hearing scheduled prior to a proposed final budget vote slated for November 7th.  Concerned residents may still contact the Town Board with their thoughts and ideas prior to the November vote. Email addresses for each member are listed below: