October 26, 2012 11:18 am | Filed under: Around Town,Investigations,News,Politics | Posted by: The Huntingtonian Staff

The original mortgage lenders to Congressman Steve Israel made over $50,000 in campaign contributions to Steve Israel for
Congress and more to the Democratic Congressional Campaign Committee he chairs.

Of two original loans to the Congressman and his ex-wife for the Dix Hills home they recently sold in a short sale, one was from Homebridge Mortgage Bankers Corp. The company went bankrupt in 2008 and is currently the subject of numerous lawsuits. Two of the loans they got to refinance the home a year later were both from Homebridge.

Records show Homebridge Chairman and President, Nicholas A. Bratsafolis and his wife Michelle, gave $21,000 to the Steve Israel for Congress Committee and his New York Jobs PAC between 2003 and 2007.

Another listed President of Homebridge Mortgage, David Pankin, from Plainview, contributed $3,500 to the Steve Israel for Congress Committee between 2003 and 2005.

Together, Bratsafolis and Pankin also contributed more than $35,000 dollars to the Democratic National Committee and the Democratic Congressional Campaign Committee, chaired by Israel.

According to Stephen Labate, Congressman Israel’s GOP challenger in the November election for the newly drawn 3rd Congressional District, “The donations tied to the loans raise serious questions of insider sweetheart deals.”

In July of 2004, Congressman Israel and his wife, Suffolk County Family Court Judge, Marlene Budd, purchased the Dix Hills home with two mortgages: one from Homebridge for $464,000 dollars and another from National City Bank for $57,950 dollars.  Congressman Israel paid a down payment of $58,050 dollars or roughly 10% on the original purchase.

“It is more than curious that just a year after purchasing the home, the congressman refinanced the home at 98.5% of the original 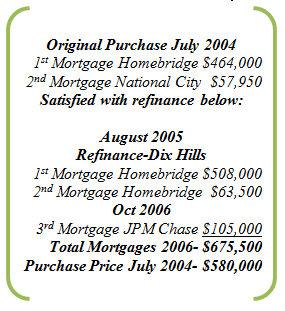 purchase price from a mortgage lender whose principle owners just happen to be major donors to the congressman and his party.” according to Chris Thompson, Mr. Labate’s campaign manager.  The Israel camp did not respond when asked how much, if any, down payment was part of the refinance deal in 2005.

In October of 2006, Congressman Israel and his wife got another mortgage on the same property for $105,000 dollars from JP Morgan Chase.  That brought the total in 2006 to $675,500 dollars for the three mortgages on the Long Island home.  In 2006, they also purchased an apartment in Washington, D.C. for approximately $416,000 dollars.

The house in Dix Hills sold recently for $460,000 dollars.  In early October, The New York Post ran a story revealing JP Morgan Chase forgave $93,000 dollars on Israel’s   “underwater mortgage”.   The Israel campaign does not deny the amount and the fact of the JP Morgan Chase loan forgiveness.

Congressman Israel voted in 2008 to bailout JP Morgan Chase with $25 billion, through the Troubled Asset Relief Program (TARP).  JP Morgan paid back the loan with interest.  GOP strategists argue they may have paid back Congressman Israel by forgiving the $93,000 debt he still owed on his “underwater loan” to them.  The Israel camp denies any special treatment and insists that all transactions were above board and by the book. 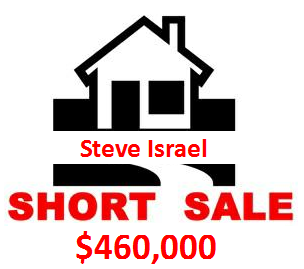 “On the surface it would appear that he would not qualify for such a reduction, so we asked the House Ethics Committee to investigate the circumstances that surround what looks to be a highly questionable transaction and a potential abuse of power.”

Stephanie Slater, Communications Director for Congressman Israel, has insisted that Israel ran the short sale by the House Ethics Committee and followed its’ advice.

Mr. Labate believes this will hurt Steve Israel when the voters go to the polls.  “Some have lost their homes and others have been forced into bankruptcy and they may be convinced that the Congressman used his influence and position to secure this sweetheart deal from his bank.” Labate said.

Congressman Israel and his wife, filed for divorce in 2011, after 8 years of marriage.  This combined with the depressed housing market entitled them to be forgiven $93,000 of their home loan on a short sale of their $553,000 Dix Hills house, Ms. Slater told The New York Post .

“That being the criteria, half the households on Long Island should be able to get loan forgiveness…but they can’t.” Thompson said.

The 17% loss to the bank is not unusual Ms. Slater said “The Congressman and the Judge did what everyone else would do: found a potential buyer and had a lawyer negotiate the sale with all the parties for a price consistent with comparable homes in the neighborhood.” according to the article.

Congressman Israel will not have to pay taxes on the cancellation of debt, because the Mortgage Debt Relief Act, (HR 3648,110th Congress), was extended through 2012 by the Economic Stabilization Act of 2008, Steve Israel voted for. 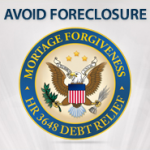 Before the Mortgage Debt Relief Act, anytime a lender, would write down (or forgive) the borrower’s debt to accommodate a settlement, they were required to report the amount of the write-down to the IRS and it could be considered income to the borrower. Treated as income the written-down amount becomes taxable and would need to be reported on the 1040 tax return.  Normally, if a person gets debt forgiveness on an unsecured debt like a credit card, he must pay taxes on it.  A temporary measure, The Mortgage Debt Relief Act was   to expire, but thanks to the extension of the act through 2012, something Congressman Israel voted for, he will not have to pay taxes on the $93,000 JP Morgan Chase forgave.

SPECIAL RULES AND DEALS FOR MEMBERS OF CONGRESS? 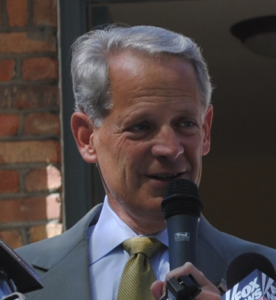 Family Court Judge Marlene Budd and Congressman Israel have a combined income of over $300,000. Records show they purchased a 2nd home in Washington D.C. in February 2006.  Two mortgages were taken out on the D.C. apartment from Wachovia Bank: one for $56,667 and another for $302,228 for a total of $358,895. This apartment is not currently listed for sale as reported in NEWSDAY recently.

The total mortgage debt on their two homes in October of 2006 was about one million dollars.  Without including any credit card debt they might have had, their debt equity would be greater than the norms allowed for a conventional mortgage at their pay grade, according to the Labate campaign.

Democratic New York State Senator Kirsten Gillibrand, has a televised campaign ad touting the new “Stock Act” she recently passed – banning insider trading in the stock market by members of Congress based on information they get as members of influential committees. “Members of Congress should play by the exact same rules as families like yours.”

Some Republican’s are questioning whether Mr. Israel who has represented the 2nd Congressional District since 2001 and is now running for the 3rd CD, is playing by the same rules as his own constituents when it comes to his mortgage.

According to Stephen Labate,  “Since the story of the Congressman’s short sale broke, voters all across our district have been expressing their outrage, both to me and to our campaign volunteers.  Many have relayed their personal stories of financial duress and being turned away by their mortgage lenders when they sought relief. Voters are tired of the insider deals our elected officials cut for themselves and I believe they will voice their discontent at the polls on Election Day.”

Regarding the issue of the Homebridge campaign contributions to Congressman Israel, Ms. Slater declined to comment.

One Response to Israel’s Lenders Gave Thousands To Campaign