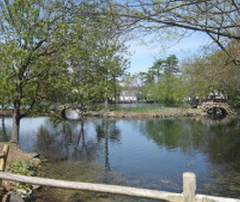 Suffolk County Police Homicide Squad detectives are investigating the death of a Huntington Station toddler that drowned this morning in a pond at Heckscher Park.

Second Precinct officers responded to a 911 call in which the caller reported that a child had fallen into a pond at the park, located at 2 Prime Ave., Huntington, at approximately 11:40 a.m. When officers arrived, the 2-year-old boy, who was at the park with his father, had been removed from the pond and a good Samaritan was administering CPR. A Second Precinct officer transported the toddler and his father to Huntington Hospital in Huntington where the boy was pronounced dead. The Suffolk County Police Homicide Squad Section is investigating the incident, although at this time, it appears to be accidental.