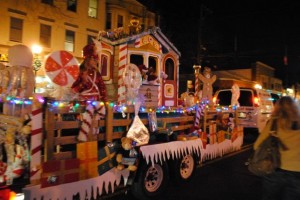 The most noticeable differences from last year’s event, which drew more than 10,000 people, are a later starting time to allow people extra time to participate in Small Business Saturday and a different location for the holiday tree that will be lit as part of a brief ceremony following the parade. The tree will be located at the intersection of Wall and Gerard Streets, where it will remain for the entire holiday season.  As was the case in previous years, the trees on the Village Green and at Town Hall will be lit simultaneously.

Continuing from last year are competitions for the best floats in two categories – fire department and commercial – and for the best-decorated business.

Numerous fire departments, scouts, and veterans and civic groups are scheduled to participate in the parade, which will begin at the Big H Shopping Center and proceed north on New York Avenue to Main Street, where it proceed west along Main Street past the reviewing stand at Wall Street to West Neck Road. Wall Street will be closed to traffic from Main Street to Gerard Street until 9 p.m. for the festival, which will include performances from many local groups and promotions from local merchants. In addition, the wildly popular Gamin ride truck will return, as will the horse and buggy rides.

Parents are invited to bring their children to meet Santa and Mrs. Claus and some of their favorite characters, including Snoopy, The Grinch, Rudolph the Red Nosed Reindeer, Sesame Street’s Elmo and Toy Story’s Woody. The Halesite Fire Department will have Buddy the Elf on board the actual sled used in filming the movie “Elf.” Free hot chocolate and cookies will be served.

“This is only the parade’s third year, but already it has become an institution and an integral part of the holiday season in Huntington,”Supervisor Frank P. Petrone said. “This is another example of what makes Huntington such a special place during the holiday season and year-round.”

People are encouraged to bring non-perishable food to help replenish the Huntington Food Council food pantry depleted as a result of Hurricane Sandy. Bins will be placed at locations along the parade route and at the festival.