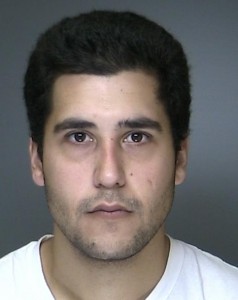 Max Schneider of Dix Hills was arrested for robbing the Bank of America in West Babylon on December 3. Detectives charged 23 year old Schneider, with Robbery 3rd Degree, and two counts of Criminal Possession of a Controlled Substance 7th Degree.

On Monday, December 3 at approximately 1;30, a man now believed to be  Schneider entered the Bank of America located at 560 Montauk Highway in West Babylon and handed a teller a note which stated that he had a gun and demanded cash. The teller complied with the demand and the suspect fled the bank on foot.

The robber was described as a white male, approximately 6 feet tall, and between 25 and 35 years old. He was wearing a black knit cap, dark sunglasses, a grey sweatshirt, blue jeans, and light-colored surgical gloves.

Schneider is scheduled to be arraigned at First District Court in Central Islip on December 6.