On July 4, 2012, three young lives were lost when a boat sank in Huntington Harbor. One of the young victims was Victoria Gaines. As the news circulated, stunned community members immediately began to talk about what could be done to help the families.

Victoria attended Washington Primary in the Huntington School District. The members of Washington Primary had just lived through another tragedy where they lost one of their beloved teachers, Joanie Balsari, to cancer. When Mrs. Balsari passed away, the school community got together and planted a garden in her honor. After the garden was complete, there was a beautiful dedication ceremony. 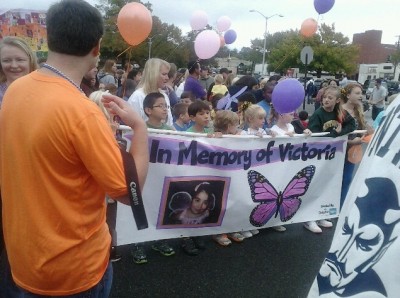 Heartbroken parents, teachers and staff immediately knew they wanted a permanent memorial to honor Victoria. Initial talks included the idea of adding to the Joanie Balsari garden. It was eventually decided that the memorial would be something separate and more fitting to honor and remember the spirit of the happy, cheerful Victoria. They wanted the memorial to be something that the entire community could become a part of.

Eight year old Emily Geller and her mom Deb were among those that took part in the early discussions. Emily and Victoria were friends and classmates. The idea began to evolve to create Victoria’s Playground. Emily Geller, who often played with Victoria on the playground really liked the idea and felt that Victoria would too. Emily said, “whenever we would go outside for recess, Victoria and all of our friends would immediately run to the slide. Victoria loved the playground”.

A small group of people got together to discuss how to make Victoria’s Playground a reality. The group included Washington Primary Principal Marsha Neville, Victoria’s mom Lisa Gaines, Deb Geller, several of Victoria’s teachers, and parents.

Lisa Gaines, loved the idea of the playground and was so moved by the community wanting to honor her daughter’s memory. Lisa said it is the support of the community and the love for her son Ryan that keep her going. She said the pain of losing her child is indescribable. “It is every parents worst nightmare, but the reality is actually worse”, explained Lisa. Shortly after losing Victoria, Lisa promised herself that she would do something every day in her daughter’s honor. “When she was alive I needed to do things for her daily, as all parents do. I want to be able to continue to do things for my daughter”. Lisa continued, “We all hope that our children will leave a positive mark on this world. The dedication of this playground, is one small way that my daughter will leave her mark on this world.” Besides helping to raise money for the playground fund, Lisa is also involved in working toward boating safety legislation and she plans to start a foundation in her daughter’s honor.

The ultimate goal is to raise enough funds to install playground equipment on the grounds of the Washington Primary school. The hope is that there will be enough funds for the equipment, installation and to have a dedication event. It is estimated that approximately $40,000 will be needed. All community members will be invited to the dedication.

At the school’s Harvest Hoedown in October, various vendors attended and donated to the Victoria playground fund. The same happened on, November 28, at the school’s book fair and holiday happening.

Among the vendors was 8 year old Emily Geller who started Bows of love for Victoria. Emily and her mom started making hair bows to help raise funds for the playground. 100% of the profits will go towards the fund. The hair bows sell for $3 or two bows for $5. Emily said she was hoping that lots of people would find out about what she is doing and she will be able to sell enough bows to help keep the memory of her friend alive. For more information about how to purchase bows from Emily, contact Emily’s mom at debra_michel@yahoo.com.

Many community members promised Lisa that they would not forget Victoria in the coming days and weeks. Raising funds for the playground and planning for the dedication is how they are doing it. When the goal is reached, it will be a beautiful testament to a caring community who worked together to reach a goal in honoring the memory of a little girl.

If you would like to contribute to the Victoria Playground fund, please make checks payable to HHS Student Government and mail to Washington primary, 78 Whitson Road, Huntington Station, NY 11746. Donations are tax deductible.