The Centerport Fire Department was dispatched to a reported  ceiling collapse at a residence on Little Neck Road, Sunday evening, December  23, at 8:16 p.m.  Mackenzie Sanborn, 12, was babysitting her brother  Austin, 9, when part of the dining room ceiling collapsed.  Mackenzie  called 911 which brought the response of Centerport volunteer firefighters  and Suffolk Police officers.  The roof of the home was damaged by a tree  during Hurricane Sandy, and was in the process of undergoing repairs.   Water leaked through the tarp on the roof, which caused the sheet rock and  plaster ceiling to collapse. Firefighters secured the ceiling by removing  loose hanging pieces and insulation.  The children were not injured and  their parents soon arrived home.  About 25 firefighters and rescue  personnel were on the scene with a heavy rescue truck, engine and ambulance,  under the command of Assistant Chiefs Nick Feeley and Brian Mark. Deputy Chief  Dr. Jack Geffken, the department’s Medical Officer, was also on the  scene.

Pictured are Centerport firefighters removing pieces remaining  from the damaged ceiling, and Mackenzie Sanborn, 12, and her brother Austin,  9,  with their dog Onni who are all safe and sound. 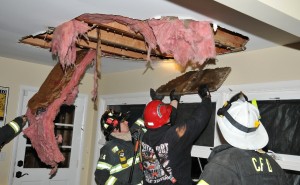 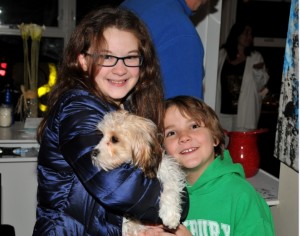