January 18, 2013 5:27 am | Filed under: Around Town,Arts & Entertainment,News,Northport | Posted by: The Huntingtonian 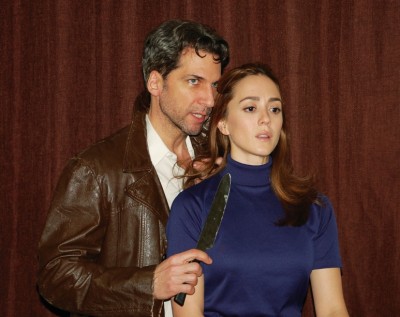 Announcing the cast and creative team for the tense thriller, Wait Until Dark, where a cool-as-ice psychopath smooth talks his way into the home of an unsuspecting blind woman.  She soon discovers she’s harboring a dangerous prize and that he’ll try anything to get it.  Previews begin on Thursday, January 24 at 8:00 p.m.; with the official opening on Saturday, January 26 at 8:00 p.m. and running through March 10, 2013.

Frederick Knott’s thriller is the story of Susy Hendrix, a recently blinded housewife who becomes the target of three con-men searching for illicit drugs.  Susy’s husband, Sam, had been persuaded by a strange woman to transport a child’s doll across the border, not knowing what was being smuggled inside. This masterfully constructed drama moves from one moment of suspense to another as it builds toward an electrifying, breath-stopping final scene.  This play, that starred Audrey Hepburn in the film version, is one that will have you sitting on the edge of your seat. Patrons are asked not to reveal the ending of the play.

ALAN SOUZA has directed six other shows for this Theater.  He recently made a revisionist 10-person rendition of the musical Oliver, to great acclaim.  He also directed for New Jersey Repertory, Arkansas Repertory, Walnut Street Theatre, The New Theatre, Maltz Jupiter Theatre, Virginia Musical Theatre, Human Race Theatre Company, and the Texas Shakespeare Festival.  He was nominated for the 2008 Carbonell Award and has received multiple Edgerton Foundation grants for his new works.  He is in development with the play Scandal, by Emmy Award winner Treva Silverman, and the new play Something Vivid by Kevin Rehac.

Wait Until Dark will feature scenic design by JONATHAN COLLINS (The Kravis Center’s premiere production of Divorce Party and John W. Engeman Theater’s A Christmas Carol – A Ghost Story of Christmas) with costumes by MEGAN MOORE (Costume Assistant on John W. Engeman Theater’s Hairspray and Camelot, latest design work was seen in California at the Sierra Rep Theater). Lighting is designed by JILL NAGEL (Resident Lighting Designer at NJ Repertory, NYC Designs include Poetic License, Housewives of Mannheim, The Man in Room 306).  Sound design by CRAIG KAUFMAN (John W. Engeman Theater’s A Christmas Carol – A Ghost Story of Christmas and Sweet Charity).  Hair and Make-Up design by MARK ADAM RAMPMEYER (Associate Artistic Director at the John W. Engeman Theater, his work can currently be seen in the Roundabout Theatre Company’s production of Talley’s Folly with Sarah Paulson. Other designs have been seen on Broadway in Lysistrata Jones, West Side Story and The Farnsworth Invention).  Casting by STEPHEN DeANGELIS and the Production Stage Manager is Michelle Lynn Hines.

The featured actors in Wait Until Dark are: CHRISTINA BENNETT LIND as the blind housewife, Susy Hendrix.  MICHAEL SHARON as the sinister mastermind, Roat.  G.R. JOHNSON and ERIC ROLLAND as Talman and Carlino, the two ex‐convicts who are enlisted by Roat.  STEVEN ALAN O’BRIEN as Susy’s husband, Sam Hendrix and CARLY TAMER and NATALIE SEUS as Gloria, the young neighbor girl.

STEVEN ALAN O’BRIEN (Sam Hendrix) Recent appearance includes Stuyvesant Town: This is Your Home at the Signature Center, At Home at The Zoo (Jerry), Comedy of Errors (Anti. of Ephesus), MC/Floozie in the DIA installment of Kathe Koja’s adaptation of Under the Poppy.

CARLY TAMER (Gloria) Credits include: The John W. Engeman Theater Fiddler on the Roof.  Other credits include: National Broadway Tour: How the Grinch Stole Christmas (Cindy-Lou Who); Off-Broadway: I Love You Petty and Favre.

NATALIE SEUS (U/S Gloria) Credits include: The John W. Engeman Theater where she just finished her run in A Christmas Carol. Other credits include Sound of Music (Gretl), Charlie and The Chocolate Factory (Veruca Salt), The Little Mermaid (Ariel), and Alice In Wonderland (Alice)

WARNING: Some of the play does take place in complete darkness and some other moments may be too scary for young children.

Tickets are ON SALE and are $55.  Tickets may be purchased by calling (631) 261-2900, by visiting www.engemantheater.com, or at the Engeman Theater Box Office at 250 Main Street, Northport. Visa, MasterCard, Discover and American Express accepted.  To purchase Season Tickets and Gift Cards please contact the Box Office directly.  For group rates or to host an event at the John W. Engeman Theater, please contact the Group Sales Department at 631-261-2900.  For information on advertising in our Programs or in our Lounge, please contact the Advertising Sales Department at 631-261-2900.  The Theater is also home to the John W. Engeman Theater Studio of the Performing Arts, offering classes and camp programs for children for more information at 631-261-2900.

The John W. Engeman Theater at Northport is Long Island’s only year round professional theater company, casting our actors from the Broadway talent pool. From curb to curtain, we have made it our business to provide affordable, quality theater in an elegant one-of-a-kind location with outstanding facilities and extraordinary service. The renovated Theater offers stadium-style seating, state-of-the-art lighting and sound, a full orchestra pit, and a classic wood-paneled piano lounge with full bar.

For a complete show schedule and more information contact the theater directly at 631-261-2900, visit the box office at 250 Main Street, Northport or visit www.EngemanTheater.com