The Greenlawn Fire Department responded to a house fire on Sinclair Drive and Manor Road, on Friday night, January 18, at about 10:40 p.m. Upon arrival, firefighters found heavy fire involving the garage and a vehicle parked in the driveway, which quickly spread into the attic and first floor of the one-story ranch home. Greenlawn firefighters stretched several handlines into the house and began an aggressive interior attack. Mutual aid assistance was requested from the East Northport and Huntington Manor FD’s for engines and crews for Rapid Intervention Teams. Centerport and Dix Hills FD’s provided an engine and ambulance to standby at Greenlawn’s firehouse. The occupants of the home escaped uninjured prior to the arrival of firefighters. About 75 firefighters were on the scene with four engines, a heavy rescue truck and three ambulances. The fire was controlled within 45 minutes, under the command of Greenlawn Fire Chief Scott Waryold, with Assistant Chiefs Kurt Allen and Mike Zeis overseeing the interior firefighting attack. The Suffolk Police Arson Squad and Huntington Town Fire Marshal are investigating the cause of the fire, which extensively damaged the home and two vehicles. Suffolk County Fire-Rescue Coordinators were also on scene to provide assistance. Chief Waryold said that a “good aggresive attack combining the use of a deck gun and handlines helped limit the amount of damage.” 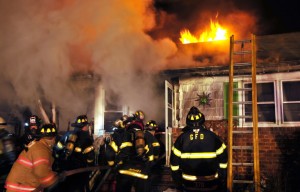 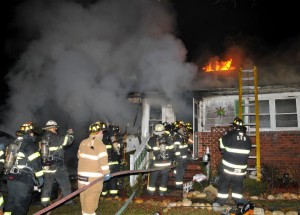 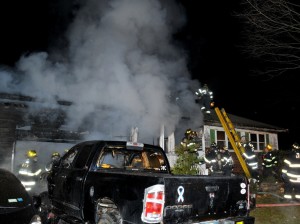 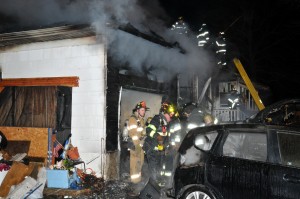