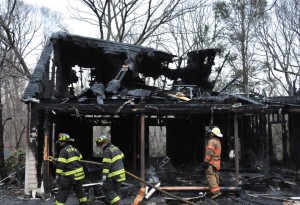 The Cold Spring Harbor Fire Department responded to a house  fire on West Neck Road near Camel Hollow Road in the Village of Lloyd  Harbor, Monday morning, January 28, at 6:11 a.m. First arriving firefighters  found a three-car attached garage completely engulfed in flames, that was  connected by a breezeway to the two-story home.  Firefighters began an  aggressive attack and were able to keep the flames from reaching the  house.  About 40 firefighters from Cold Spring Harbor, Halesite,  Huntington and Huntington Manor FD’s
responded with six trucks and two  ambulances, and quickly had the fire controlled. The incident was  under the command of First Assistant Chief Robert Hahn and Second Assistant  Chief Dan Froehlich. A couple, a young child and a pet dog were  able to escape the home uninjured prior to the arrival of firefighters.  Suffolk County Fire-Rescue Coordinators were on scene to provide assistance. The  Suffolk County Police Arson Squad and Lloyd Harbor Police Department are  investigating the cause of the fire. 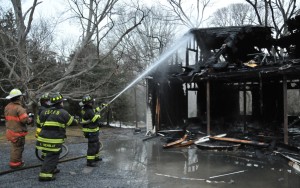