John Dies at the End, the new horror comedy by director Don Coscarelli, is based on a popular, somewhat lengthy novel, and 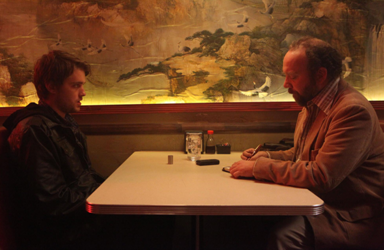 if you hadn’t known that, you probably could have guessed based on the film’s content. While a good amount of what’s in the movie is well executed, the film leaves out so many details and plot points that it feels like a Sparknotes summary of every other chapter. This gives the movie an extremely rushed pace, as if it’s being dictated by a speed-reader who is only giving us the highlights. At the same time, it sticks too closely to the book in some places, to the point where non-readers will probably find themselves more puzzled than entertained. It’s an admirable effort and often extremely amusing, but it falls significantly short of achieving any of the same heights as its source material.

John Dies at the End is narrated by David Wong (Chase Williamson), also the pseudonym of the book’s author, as he explains his crazy story to a reporter, Arnie (Paul Giamatti). David and his friend John specialize in dealing with paranormal phenomena, as in an early scene where they receive a call from a young woman being harassed by her dead boyfriend. Before long, David and John are thrust somewhat unwillingly into adventure as a new drug, referred to as Soy Sauce, hits the streets, allowing those who use it, including David and John, to tap into an alternate dimension full of insect like creatures, who may or not be threatening to take over the world.

With an adaptation of a book like this, if you’ve read the source material, it’s extremely difficult not to compare. I’m totally open to a movie and a book being two separate entetities, but with John Dies at the End, most of the differences create huge problems. For one, because the movie is so rushed, frantically moving from one plot point to another, we never have any time to spend with these characters to get to know them, aside from maybe the narrator, Dave. In the novel we really grow attached to John and Dave, because we spend so much time with them, but in the movie, John barely even has that much screen time at all. We are given very little reason to actually like him, other than he’s the title character.

There are also a good amount of significant plot points totally dropped from the book. I’m okay with this in theory, except that a few of these are really what made the story so memorable and entertaining. Yet the movie, while leaving out so many important things, keeps a few odd details the same. For instance, the opening scene involves Dave telling us a riddle about an axe. He asks if we were to take an axe and, over time, replace both the head and the base, is it still the same axe? This is meant to mirror a scene that happens towards the end of the novel, which I won’t give away. However, that plot point was totally dropped from the movie. Why, then, is the riddle about the axe still there? The event it’s meant to foreshadow never happens, so within the context of the movie, it makes absolutely no sense.

These sort of bizarre decisions plague the film from beginning to end, but where John Dies at the End finds its most success is in the opening 40 minutes or so. Here is where the movie follows the book the closest, and it’s no coincidence that this is by far the most entertaining section. The tone it finds, a somewhat removed, irreverent style of humor, works quite well. There’s a lot of great stuff here with moments of weird humor that play out on the screen just about as well as on the page. After this point, the movie veers off in its own direction, with a final act that is significantly different than the book.

Judging it by its own terms, and not by comparison to the book, this final act is okay, but it still feels extremely rushed, and since so many vital plot points are dropped, it barely makes any sense at all. Because the movie is so low budget, the finale also reeks of “we did this to save money,” most noticeable during a scene meant to take place in a cave system but shot entirely on green screen, to the point where it looks like an SNL sketch filmed and edited in less than an hour. There just aren’t high enough stakes when everything feels so small and artificial.

When looked at as an extremely low budget, nonsensical little horror movie, John Dies at the End is a moderately entertaining watch. As an adaptation of the book, it falls short, not coming close to doing it justice. While it’s okay to change aspects of the source material in theory, the movie just feels too rushed as it attempts to be its own thing while also cramming in as many events as possible into 90 minutes. The film’s tone is goofy enough that you can excuse many of its flaws, including the terrible special effects and the fact that it often makes very little sense, if you go into it with the right expectations, but given how incredibly memorable the source material was, I can’t help but look at John Dies at the End as one big missed opportunity.