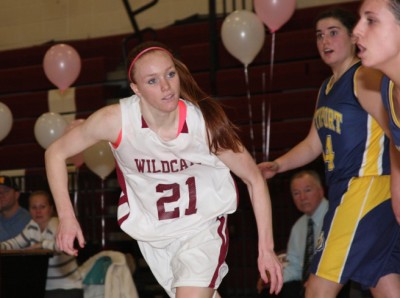 You just knew from the ball tip that Whitman had a little something extra going on. And you knew that, like any top-tier basketball team, Northport would have something to say about that. Both teams were tied for first place in Suffolk County’s League II, with 8-1 records, and both teams made it an “on the edge of your seat” kind of game.

The Wildcats jumped out to a quick lead, 15-9, with a smothering and aggressive defense led by seniors Marissa Olsen (6 points) and Katira Jemmott (10 points).  In spite of Whitman’s strong defense, Northport responded quickly with an 11-point second period run to set up a 20-20 tie going into halftime.

The third period seemed a duplicate of the first, with Whitman’s defense keeping the pressure on and Kelly Bilodeau working her magic on offense. Bilodeau would end up with 21 points and 10 rebounds on the night. In the fourth and final period, Northport gave their best shot, with the lead going back and fourth several times.

But in the end, both teams would score 17 points in the fourth period, and as the final minute ticked away, so did the chance that Northport would mount a comeback. Whitman’s win 52-46 gives them sole possession of first place in the league. Scoring also came from Essence Casey (8 points), Hayley Mena (3 points), Chyna Jones (2 points), and Rose Pedretti (2 points). This was the final game in the month-long Coaches vs Cancer Series. Wildcat Booster Club president Donna Grennan is please to report that last night’s game netted $1500 for the cause.

Whitman’s final regular season home game, a special night for the senior girls, will be played on Tuesday, February 5, in the South Gymnasium.