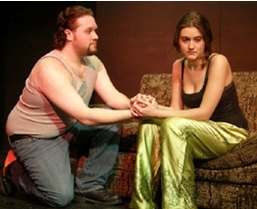 Danny and the Deep Blue Sea takes place in a rundown bar in the Bronx, where two of society’s rejects, Danny and Roberta, strike up a conversation over their beers. He is a brooding young man who relies more on violence than reason and she is a divorced, guilt-ridden woman. When they come together, the result is a humorous, violent fairy tale about a frightening and fascinating relationship.

Shanley, a playwright and screenwriter, has won a Tony, an Obie, an Academy Award and the Pulitzer Prize. The New York Times said the play is “the equivalent of sitting at ringside watching a prize fight that concludes in a loving embrace.”

The theatre is located at the Vanderbilt Museum, 180 Little Neck Road, Centerport, NY, and is fully accessible to the handicapped.

Arena Players Repertory Theatre is a non-profit company funded in part by the New York State Council on the Arts, the Suffolk County Office of Cultural Affairs, and individual contributions.

Photo above by Frederic De Feis