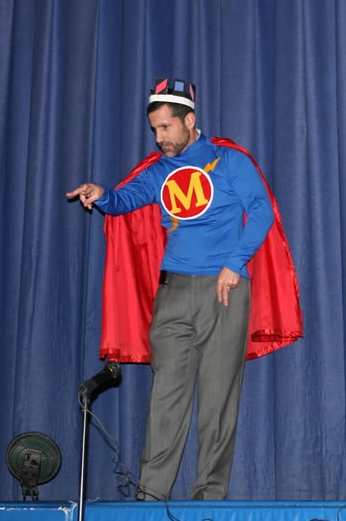 Since Superintendent Polansky took over at the Huntington School District, many have wondered if he is a super hero.  The students at Southdown Primary may have gotten confirmation on that when he showed up at their Family Math Night.

“The event was extremely successful and well attended,” Southdown Principal Michelle Marino said. More than 150 students and their parents turned out on a cold winter night to show their enthusiasm for mathematics. Participants ranged from kindergarteners through fourth graders.

Southdown’s Family Math Night has grown in popularity, with participation doubling over the past five years. “The objective of the evening was to give opportunities to parents to work alongside their son or daughter to complete math challenges that reflected the common core standards for mathematics at each grade level,” Mrs. Marino explained.

While the activities could be quite challenging at times, they were presented in a game-like manner that allowed children and parents to share the joy of mathematics and realize the fun of learning. Students rotated through learning/activity centers facilitated by Southdown teachers.

An energetic group of 19 Huntington High School National Math Honor Society members shared their expertise and help assist and inspire Southdown’s youngsters to approach math as a challenge to be solved.

A very special guest presented the crowd with an “ultimate challenge” near the end of the evening. “Math Man” wowed both children and parents alike with his superior Tangram skills and then challenged them to create animals using the geometric shapes.

“The teams worked diligently with their high school ‘mathspert’ to make adjustments to the shapes until the animal figure was agreed upon,” Mrs. Marino said. If the crowd thought “Math Man” looked familiar it was because he doubles as Huntington Superintendent James W. Polansky.

Southdown Primary School students don’t have to be sold on the idea that math can be an awful lot of fun once a person gets the “hang of it.” Southdown’s recent Family Math Night proved the point as parents and their children took delight in engaging in a variety of math related games and challenges.