Disney’s ‘Beauty and the Beast’ At Elwood-John Glenn

February 18, 2013 5:43 am | Filed under: Arts & Entertainment,Elwood School District | Posted by: The Huntingtonian Staff 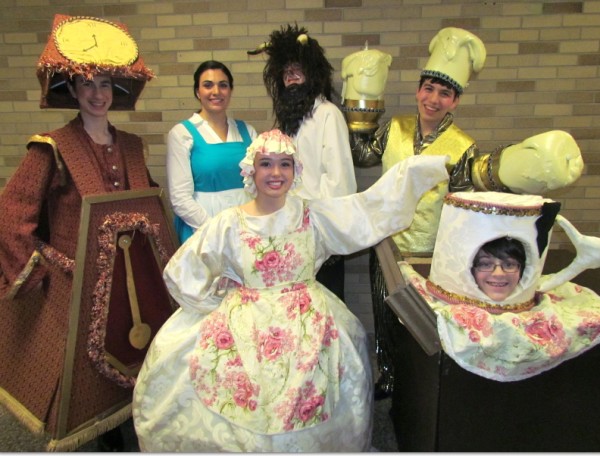 Students of Elwood-John Glenn High School in the Elwood Union Free School District captivated a packed auditorium with performances of Disney’s “Beauty and the Beast.”

Directed by Rachel Nagle and choreographed by Maria Aiello, the cast members worked tirelessly to ensure that this year’s production was flawless and enjoyable for audiences. The three evening performances featured Kyle Banks as the Beast and Christina Dimitriou as Belle, the odd village girl held captive in the Beast’s castle in hopes of breaking the spell that altered his appearance and left him a recluse. Also sharing the castle and the effects of the spell are a myriad of delightful characters, including Cogsworth and Lumiere, played by Daniel Schindlar and Ethan Felizzari, as well as Mrs. Potts and her son Chip, played by Emily McPherson and Noah Austin.  These characters invite Belle to “Be Their Guest” and attempt to make her feel welcome despite the Beast’s difficult temperament. An outstanding stage crew and a talented pit orchestra, directed by Karen Gellert, supported the cast.

“This show is a musical favorite for many people, and the students came through and gave nothing short of an exemplary performance,” remarked Ms. Nagle. “Ms. Aiello and I couldn’t be more proud of the students involved.”