Gunther Cassell shifted into overdrive for the final 20 yards of the 100-yard breaststroke state finals at the Webster Aquatic Center in Rochester last Saturday, overtaking the race leader and touching the wall in a new state record time of 56.24 seconds. It marks the Huntington High School sophomore’s second consecutive state title in the event.

“Gunther did a great job and turned it up when he had to,” said Gil Smith, Huntington’s head coach. Cassell’s blistering time in the finals 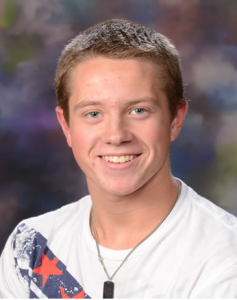 was considerably swifter than his preliminary round performance of 56.72, which qualified him All-American honors.

Cassell trailed No. 1 seeded Pittsford senior Matthew Tanchick for most the finals before hitting his “booster stage” and shattering the state record of 56.48 previously held by Stanley Wong. “Gunther is a tough kid who showed he can shake off pressure and perform,” Smith said.

Cassell joins his father, Geoff Cassell as a two-time state swimming champion. Geoff Cassell captured a pair of titles while competing for West Islip High School. “Gunther puts in an enormous number of hours in the pool,” Smith said.

In other action, Cassell was unable to reach the state finals in the 50-yard freestyle and teammate Thomas Scott was stopped in the preliminary round of the 200-yard IM and 500-yard freestyle races. “It’s an accomplishment just to get this far, so we’re proud of what Tom has achieved this season,” Smith said.

As for Cassell, all eyes have been on him all year long, wondering if he could cover himself in glory a second time. “Gunther came here to win repeat as a state champion and he’s going home with the gold medal and All-American honors,” Smith said. “We’re both really happy.”