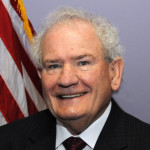 William Naughton, Huntington’s longtime superintendent of highways, has announced his plans to seek re-election this fall.

“It has been a privilege to serve as superintendent of highways for the past 25 years,” said Naughton. “I appreciate the confidence that voters throughout the Town of Huntington have continued to place in me and would welcome the opportunity to continue to serve our residents and taxpayers in an honest and responsible manner.”

As superintendent of highways for the Town of Huntington, Naughton heads an office that is responsible for the maintenance and upkeep of 784 miles of roadways and right-of-ways within the town. First elected to the position as a Democrat in 1987, he was last re-elected in 2009 with the support of the Democratic, Republican, Independence, Conservative and Working Families parties.

“I’ve worked hard to ensure that roadways throughout our town are properly maintained, paved, resurfaced and reconstructed,” says Naughton. He acknowledges that doing so is not always easy, citing the challenges posed by the epic storms and severe weather conditions of recent months.

“Thanks to the efforts of conscientious and dedicated town employees, we were able to cope well with both Superstorm Sandy and February’s blizzard, which wreaked havoc across Long Island.” said Naughton. He also expressed gratitude to town residents “for their patience and understanding as the town grappled with these storms of unprecedented magnitude.”