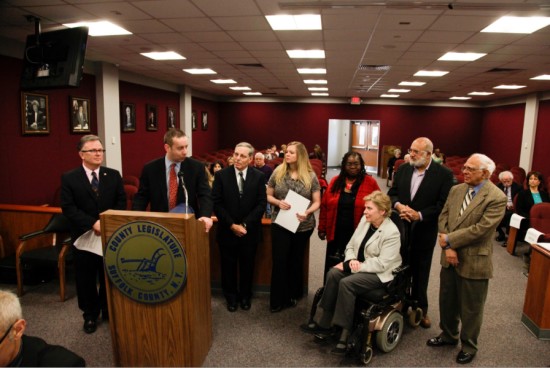 County Executive Steve Bellone and the Suffolk County Legislature presented the Suffolk County Human Rights Commission with proclamations recognizing the agency’s 50th anniversary and declaring 2013 the Year of Human Rights.  As the Human Rights Commission Chairperson Rabbi Dr. Steven A. Moss stated before the Legislature on March 5th, “Certainly the work of the Commission cannot be relegated to a one-year recognition, but must always be an essential thread in the very fabric of our County’s society. Let us never forget the mandate placed before us by the stirring words of the Declaration of Independence signed on July 4th, 1776: ‘We hold these truths to be self-evident, that all men are created equal, that they are endowed by their Creator with certain unalienable Rights, that among these are Life, Liberty and the pursuit of Happiness — That to secure these rights, governments are instituted among men, deriving their just powers from the consent of the governed.…’ and so there must therefore be a Human Rights Commission on the most local of levels to insure these rights for all men and women.”

“The work of the Suffolk County Human Rights Commission over the past 50 years has been to eliminate and prevent discrimination of any sort in Suffolk County through the fair application of the law, efficient use of resources and continual establishment of productive partnerships in the community,” said County Executive Steve Bellone.   The Commission has conducted  informational training and seminars which have allowed members of the commission to personally educate students, community groups, other government agencies and new recruits of the police department, so that they too will be able to spread the goals and mission of the Human Rights Commission.  I congratulate the Commission on its 50th anniversary and look forward to their continued work in Suffolk County.”

The Commission was created in May 1963 to enforce the laws against discrimination and to work towards the elimination of bias and intolerance in Suffolk County.  The Commission is comprised of a 15-member volunteer board of Commissioners led by Chairperson Rabbi Dr. Steven A. Moss, as well as an office staff, which, under the direction of Executive Director, Jennifer Blaske, enforce Human Rights Laws and investigate complaints of discrimination primarily in the areas of employment, housing and public accommodations.  Each year the Commission responds to thousands of inquiries from the public, most relating to unfair treatment on the job.