The Huntington Manor Fire Department rescued a pet dog from a house fire Thursday night, March 21, on Deepdale Drive in South Huntington. Huntington Manor firefighters responded to the fire at 8:48 p.m., and began an aggressive attack on a smokey kitchen fire. During a search of the house, Firefighter Scott Rubcewich found the dog in an upstairs bedroom and carried him outside on the front lawn, where firefighters gave the dog oxygen through a special animal mask. The dog suffered minor neck burns and smoke inhalation, and was transported by firefighters to the New York Veterinary Emergency Specialty Center on Route 110 in East Farmingdale. About 45 firefighters responded with six trucks and had the fire controlled within 15 minutes, under the command of Chief Fred Steenson, Jr.  The residents of the home safely evacuated and were not reported injured. The fire was contained to the kitchen area and is believed to be accidental.  The Melville Fire Department dispatched a Rapid Intervention Team to the scene with the Huntington Fire Department providing standby coverage. The Huntington Community First Aid Squad stood by for EMS at the scene. 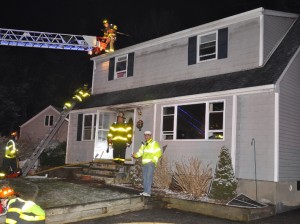