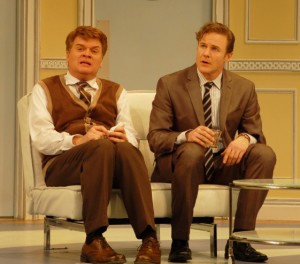 In a word LOVED-IT!

Boeing-Boeing has been performed on both stage and screen since the 1960’s to mixed reviews.  What makes it work so well this time around is 6 outstanding actors.  The story line is simple, there are no set or costume changes, so the entire production depends of the quality of actors and the way they deliver their physically exaggerated movements. Without a doubt they pull it off. Each actor has a part to play that is shallow and one dimensional and yet they make us fall in love with their character.

Bernard (Peter Simon Hilton) is an American man living the high life in Paris. He is suave and elegant on the surface, but he’s really more of a three-timing playboy than the sophisticated gentleman he pretends to be. He’s engaged to three stewardesses (they weren’t called flight attendants in the 60’s) who all live with him and yet don’t know about each other.  How does he accomplish this? Simple, they all work for a different airline and he keeps careful track of their flight schedules.

Gloria (Erin Leigh Peck) is a sexy, take charge New York girl who works for TWA; Gabriella (Michele Ragusa) the passionate and feisty Italian beauty works for Alitalia; and Gretchen (Luba Mason) is a strong attractive German who works for 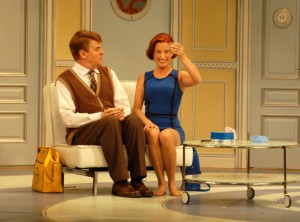 Lufthansa. Part of what makes it so funny is the shallow way the characters are portrayed. They exploit the stereotypes of the nationalities of the girls, the go-getting New Yorker; the sentimental, lusty Italian; and, the strong and domineering but thin-skinned German.  In contrast you have Robert the naive guy from Wisconsin who is totally overwhelmed by the absurdity of the situation. Bernard comes across as suave, cool and collected until his plan starts to unravel.  While, we as the audience are somehow growing fond of these crazy characters, Berthe, the house keeper,  is appalled by them all.

On the surface it seems each of the girls is hopelessly devoted to Bernard while he is supposedly in love with them all.  Bernard believes that he will pull this off endlessly with a little help from his reluctant house keeper (Kate Skinner). Upon arrival of his old time friend Robert (John Scherer) things start to unravel and the turn of events is laugh a minute hilarious. The contagious laughter from the audience added to the fun of the performance.

Although the plot line sounds risque, it is actually wholesome and pure, especially by today’s standard.  This is one of the reasons it is simply so funny. 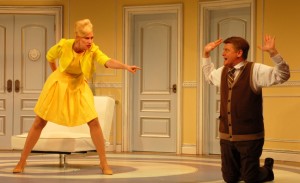 As soon as you arrive at the theater the tone is set for a really nice experience.  I enjoy listening to the commentary from patrons who are experiencing their first show at Engeman. The experience surpasses what most people expect from a local Long Island theater.

The pleasant experience starts when you arrive and interact with any of the Engeman staff.  Everyone from the valets, to the bartenders, to the ticket takers and ushers are just plain nice and eager to add to the positive experience of the theatergoer.  They seem to really enjoy being there.

Let’s not forget about the convenience of the theater itself.  Long Islanders love convenience and you will get it here.  From most locations in Huntington, you can leave your house 40 minutes from the opening curtain and have enough time to freshen up and grab a cocktail in the lovely Engeman lounge. 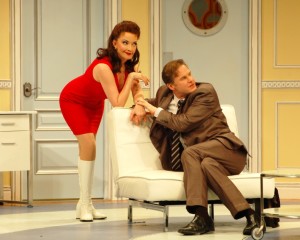 In a nutshell the play has been superbly cast. That’s what makes it work.  Despite the fact that dozens of actors have played these characters since the play first debut in France in the 60’s, I can’t imagine having a more authentic, Bernard, Robert, Gabriella, Gloria, Gretchen or Bertha.

It’s the kind of humor that takes you away and makes you feel simple happiness.  Go see it, and have a light-hearted, fun, laugh a minute experience. 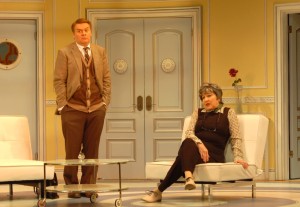