March 28, 2013 5:20 am | Filed under: Around Town,Arts & Entertainment,Huntington,News | Posted by: The Huntingtonian Staff

Seniors are invited to visit The Heckscher Museum after 1:30 pm admission free.  Docent tours begin at 1:45 pm. Groups and individuals are welcome.

Senior Second Wednesday is part of the Senior Days on Long Island program designed to provide seniors with interesting and unique opportunities at reduced or no cost.  For a schedule of Senior Days activities, visit http://seniordays.weebly.com.

“Chain your dogs and lock up your fowls!” heralded posters throughout Long Island announcing the first international road race ever to be held in America.  From 1904 to 1910, six Vanderbilt Cup Races were held on Long Island. This program will relive auto racing’s earliest triumphs, including the development of the Long Island Motor Parkway—the first road built exclusively for the automobile. Howard Kroplick, Town Historian for North Hempstead, has extensively researched the races and written two books on the subject.  His presentation will feature photos from the private archives of William K. Vanderbilt, Jr., rare race films, and an assortment of “Vanderbilia.”

1909 Alco Black Beast, 1909 and 1910 Vanderbilt Cup Race Winner, will be on view throughout this weekend and during the program.

For families with children ages 4 – 8 years

Join museum educator Tami Wood for family-friendly tours of the Museum’s special exhibitions. Families will explore, experience, and learn about the artworks on view through close looking, lively conversations, and hands-on gallery projects.

EXHIBITIONS AT THE HECKSCHER MUSEUM OF ART 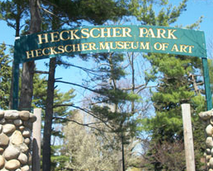 In 1913, the American public was introduced to avant-garde European art styles at the International Exhibition of Modern Art, held at the Lexington Avenue Armory and known as the Armory Show.  Organized by the Association of American Painters and Sculptors, the Armory Show created a sensation; the controversial and radical art displayed there proved to be a watershed in the development of 20th-century American art.  Modernizing America: Artists of the Armory Show focuses on American artists who participated in the Armory Show and explores the impact of European Modernism on American art in the early years of the 20th century.

This exhibition features approximately 80 works  by Long Island students in grades 9 through 12 attending public and private schools throughout Nassau and Suffolk Counties.  Selected artwork portrays a range of subjects, in many styles and media, including two- and three-dimensional work.  This is the only juried exhibition on Long Island that offers high school students the opportunity to exhibit their art in a museum.

Car Culture: Art and the Automobile

Car Culture: Art and the Automobile explores artistic response to the automobile, which has transformed life in the 20th century more significantly than any other single factor, irrevocably changing the appearance of our environment and our experience of it.  While some artists focus on images of the car itself, inspired by its alluring modernity or its status as an icon or expression of personal identity, others create artwork from car parts such as scrap metal and tires.  Later artists comment on the automobile’s ubiquitous presence in the landscape, seen in the roadside environment, the phenomenon of the road trip, and ultimately the damage caused to our environment.  The photographers, painters, and sculptors included in this exhibition examine an aspect of our lives that is usually taken for granted.

Funding provided in part by Suffolk County.  Car Culture: Art and the Automobile is made possible by The Shoreland Foundation.  Additional exhibition support is provided by Mercedes-Benz of Huntington and through leadership gifts to the Museum’s August Heckscher Society.

Hal B. Fullerton (1857-1935) was a photographer whose works document life on Long Island in the early years of the 20th century.  As a special agent and agriculturalist for the Long Island Rail Road, Fullerton’s photographs were reproduced in promotional material that encouraged tourism and farming on the Island.  Born in Ohio, Fullerton worked in New York before moving to Long Island, settling first in Brooklyn, and then progressively east to Queens, Huntington, East Setauket, and finally Middle Island.  In Suffolk County, Fullerton and his wife established experimental farms for the L.I.R.R., contributing to the area’s agricultural development.  His photographs capture the picturesque, agrarian charm of the Island in the early years of the 20th century.

Across Time & Place: Treasures from the Permanent Collection

This rotating exhibition of highlights from the Permanent Collection features a diverse range of works by American and European artists of the 19thand 20th centuries.  The current installation focuses on August Heckscher and his collection, which included works by the leading artists of his day. While Heckscher’s European works were primarily figure paintings, often revealing an interest in the exotic, his American paintings most often depicted the glories, both intimate and grand, of the nation’s physical environment.  Also on display is a selection of paintings on the theme of water that traces the development of American art from 19th-century realism to 20th-century abstraction.

The Heckscher Museum of Art, founded in 1920 by August Heckscher, serves the people of the Town of Huntington and surrounding communities. Through exhibitions of its permanent and loan collections of art and related programs, it seeks to provide inspiring and transformative educational experiences to encourage a broader understanding of our past and present and enrich the quality of life of the individuals it serves. The Museum Permanent Collection contains more than 2,200 works from the early 16th century to present. For information about The Heckscher Museum of Art, visit www.heckscher.org.