After fifteen hours of debate, Assemblyman Andrew Raia (R,I,C-East Northport) recently cast his votes in favor of the 2013-14 New York 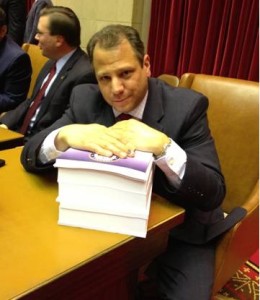 State Budget. Raia noted that while the 3,091 page budget is relatively fair and responsible, there is still much work to be done in the coming year to rectify the shortfalls.

“This budget, while modestly productive, merely leaves New York treading water overall. This is certainly a step in the right direction, away from the disastrous tax-and-spend budgets of old, but it leaves much to be desired,” said Raia.

“My Long Island colleagues and I are happy to say that we have secured nearly $22 billion for Sandy relief and successfully restored the $121 million for our children’s schools. However, contained within these bills is $90 million in troubling cuts to non-profit groups that support the developmentally disabled. I am proud to say that I joined my colleagues in voting yes on an amendment to fully restore these devastating cuts, but unfortunately the amendment did not pass. The continued increase in funding to our state’s libraries and to repair our crumbling roads and bridges is great news, as is the increased share of Medicaid payments the state is removing from the backs of local governments, but taxpayers are still in desperate need of mandate relief. The budget extends the middle-class tax cuts and reduces taxes on small businesses, but also extends the energy tax that will cost those same middle-class families and businesses $1.7 billion dollars over the next three years.”

“Long Island families have a lot to be excited about in this budget, but at the same time, we will need to work together in the coming months to accomplish all of our goals, Raia concluded”