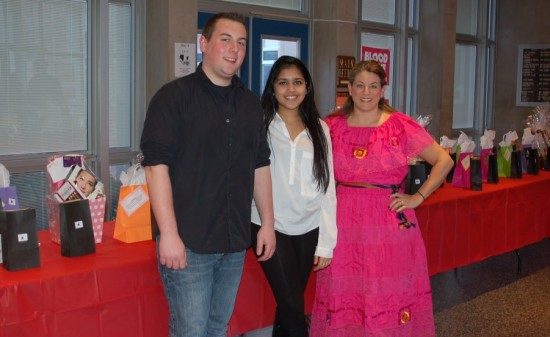 The language department of Elwood-John H. Glenn High School held its International Night on March 13. Visitors to the event enjoyed a variety of foods representing many different cultures, including Spanish, Italian, French, Korean, Chinese, Pakistani, Irish, Jewish, Polish, German and Greek. Foods were prepared by students and shared with peers, family, friends and faculty in attendance.

Several student groups performed in the auditorium. Students presented a salsa dance for the audience and poems were recited in Italian. Performers sung traditional songs in Spanish, Italian and French, and the American Sign Language classes performed two songs as well.

A Chinese auction was held during the festive evening, with 100 percent of the money raised donated to the Long Beach High School band, which was severely impacted by Superstorm Sandy. In addition, 47 baskets were donated by local businesses and families and raffled off. A total of $770 was raised for the cause.