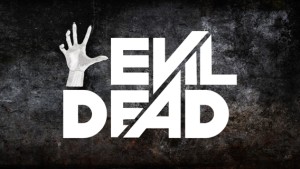 “Evil Dead” is an absolutely relentless new horror film. I can’t possibly stress that enough. It’s been said that a master filmmaker plays his audience like a piano, and by that definition, Fede Alvarez is a true master. His film made me cringe and recoil in my seat more than I have in years, and judging by the reaction of the crowd in my screening, I wasn’t alone. It is sick, twisted, absolutely repulsive, and one hell of a ride. As a die-hard fan of the 1981 classic, I can’t imagine being more satisfied with what Alvarez has done here. In some ways, and I never imagined being able to say this, it surpasses the original version. I simply can’t wait to see it again (and again, and again…)

Five friends journey into a cabin in the woods, and bad things happen to them. They uncover the Naturom Demonto, a “book of the dead” filled with ancient scriptures which, when read out loud (despite countless explicit warnings), unleashes evil itself onto the characters, who are hunted by a mysterious, demonic force. Story was never this franchise’s strong suit. It was about putting a bunch of characters together and having them brutally and hilariously terrorized for ninety minutes. Good luck being able to name any of them by the time the credits roll.

But all things considered, “Evil Dead” does an admirable job of fleshing out this story and making it a bit more concrete than in the original. In one brilliant addition, the main character, Mia (the magnificent Jane Levy), is brought to the cabin by her friends in an attempt to kick her heroin addiction. In the opening scenes, she throws the last of her stash away, and hopes to stay at the cabin for the weekend to detox, a refreshing twist on the cliché of having the teenagers go on their trip as an excuse to drink and have sex. Unlike a lot of these movies, we don’t actively hate the characters.

As far as horror remakes go, “Evil Dead” is quite simply the best I have ever seen. Though I enjoyed the recent reimaginings of “Dawn of the Dead” and “Friday the 13th,” I never felt like either was totally necessary. “Evil Dead,” on the other hand, feels completely necessary, and works perfectly as a companion piece with the original. I’ve never before seen a movie that does such an incredible job of simultaneously paying homage to its source material, while also doing its own thing, and even adding in elements that the original was missing. The 1981 version was held back by a very low budget. It’s great for what it is, but the 2013 version is, I imagine, the movie director Sam Raimi was trying to make back then, and would have if he had the resources.

And at last, we have a remake that doesn’t feel the need to copy every last scene from the original movie’s script. Take “A Nightmare on Elm Street,” for instance. That was a terrible remake, partially because it didn’t offer anything new whatsoever. Every scene was lifted directly from the superior ‘80s version. What’s the point of that? In “Evil Dead,” none of the characters from the original are even in this one. It takes the idea of “The Evil Dead,” and brings it into a new generation.

I do, however, wish Alvarez had taken that even further, not relying on any of the scenes from the original whatsoever. There are, expectedly, a handful of moments in “Evil Dead” which directly mirror events in the 1981 version, and though the higher budget definitely brings something new to the table, making these moments far more extreme, I would have preferred something totally different this time around.

Let me be clear: this is an absolutely grizzly and disgusting film from opening to closing credits. If blood and gore makes you the least bit uncomfortable, stay home. Seriously. There have been reports of audience members fainting or vomiting in the theater, and while normally these sorts of rumors are just shameless PR stunts, I wouldn’t be surprised if they were true in this case. I seriously have no idea how they managed to get an R rating, and I can’t imagine what the NC-17 version looks like.

Famously, director Fede Alvarez decided to use no CGI whatsoever for the gore effects, taking advantage of makeup and prosthetics instead. For that reason alone, this is a must see for horror fans. Though computer effects can be great when appropriate, the gore in “Evil Dead” feels that much more concrete, because we’re seeing actual, practical effects which really exist in front of the camera. When someone’s arm gets blown off, a team of artists really put the thought and effort into getting a convincing prosthetic to do that, rather than simply doing so on a computer. There’s something very appealing about that.

But then what distinguishes “Evil Dead” from a sick and shameful torture movie like “Hostel”? Well, though I wouldn’t call it intentionally funny like the original “Evil Dead 2” was, the film still occasionally has a playful tone that suggests Alvarez wants us to be having fun, here. The gore is meant to shock and disgust us, but in a way that makes us simultaneously recoil in our seats, and laugh at how crazy it all is. On the other hand, a movie like “Hostel” is sick and twisted, but in a dark, disturbing, unpleasant way, as if its director wants to punish us for purchasing a ticket. Fede Alvarez, however, encourages us to have fun with this material. And boy, what fun it is.

No, it’s not high art. There’s some lame dialogue, and aside from a magnificent lead performance by Jane Levy, the actors aren’t all too memorable. It also isn’t as scary as it is disturbing and creepy, which some might find disappointing. But for what it is, and for a remake of a classic movie, “Evil Dead” is just about perfect, and an absolute love letter to horror fans. I can already imagine a perfect Halloween double feature of “Evil Dead” and “The Cabin in the Woods,” both films celebrating everything this genre can be: sick, twisted, revolting, and an absolute blast.