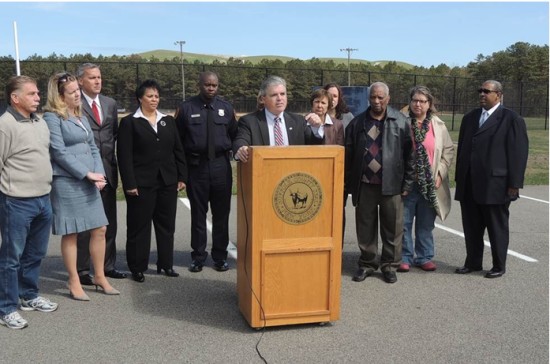 By Vanessa B. Streeter (Office of County Executive Bellone)

On April 17, 2013, County Executive Bellone was joined by legislators, community leaders and members of the Suffolk County Police Department (SCPD) to declare June “Gun Violence Awareness Month” in Suffolk County. This declaration is part of a joint effort involving New York communities statewide to promote annual month-long awareness, discussions and activities in the month of June to reduce gun violence in our communities.

“Today, we gathered to declare June as “Gun Violence Awareness Month” in Suffolk County,” said County Executive Bellone. “Every year, approximately 100,000 Americans are victims of gun violence. As we have been a witness to senseless gun-related tragedies throughout our Country, it is more important than ever to take the opportunity to raise awareness and do everything we can to reduce gun-violence in our communities.”

“The senseless murder of Alvin Brothers in Bellport was a result of illegal guns falling into the hands of gangs,”  stated Legislator Kate Browning. “So many similar cases have impacted communities across Suffolk County and throughout our Nation. Gun violence awareness is the first line of defense in preventing these crimes, and I stand with New York State and my colleagues in Suffolk County in doing everything we can to educate our young people about the effects of gun violence in our neighborhoods.”

“In addition to the tragedies of Newtown, Aurora, Virginia Tech and Columbine, gun -related incidents occur every day in American and take approximately 30,000 lives each year,” said Legislator Kara Hahn, author of Suffolk County’s new policy that requires police to cross reference individuals involuntarily transported to psychic emergency rooms against pistol licensing records.  “Homicide or suicide, intentional or unintended gun-related violence is increasing at an alarming rate.  Let us pause to reflect on those lives cut short and how we can prevent future deaths, preserve life and promote safer communities.”

“It was my pleasure to join County Executive Steve Bellone at Martha Avenue Park in North Bellport to declare June Gun Violence Awareness Month.  Areas like North Bellport have been terribly impacted by gun violence, and thus Legislator Calarco and I are planning a gun buy back on May 11th at Lighthouse Mission from 9 :00 a.m.- 12:00 p.m. ” stated Councilwoman Kepert.

Never before has the State taken the extraordinary step of pulling its citizens and institutions together to promote sustained awareness of gun violence and discussions on how to reduce it. During the month of June as well as the months leading up to Gun Violence Awareness Month, The Suffolk County Police Department has developed a three pronged approach to address gun violence in Suffolk County: