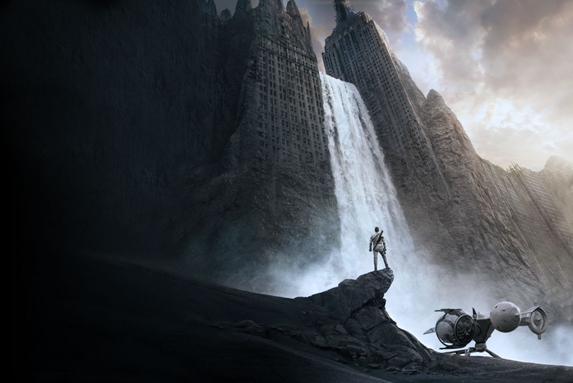 The best thing about Joseph Kosinksi’s “Oblivion” is that, refreshingly, it’s a science fiction movie that isn’t based on any preexisting franchise. The worst thing about “Oblivion” is that, despite this, it somehow feels less unique than any of the remakes, reboots or prequels of recent years. Though technically an original property, it feels disingenuous to describe it that way. This is essentially a best-of reel of every sci-fi movie made in the past 60 years, filled to the brim with tropes of the genre. Kosinksi tries to pay homage to everything we love about science fiction, and he’s often quite successful, but there’s a fine line between homage and outright unoriginality.

The year is 2077. Sixty years ago, Earth was attacked by an alien race known as the Scavengers. Humanity won the war, but by the end the planet was left completely uninhabitable. Those left on Earth fled to Titan, Saturn’s largest moon. The rest are located on the Tet, a massive space station serving as a temporary location for humans to live on before migrating to their new home.

Jack Harper (Tom Cruise) and Victoria (Andrea Riseborough) are the last two humans stationed on the planet, part of a mission to extract Earth’s remaining resources before the move to Titan. Jack spends his days surveying the planet and looking after drones, airborne weaponry that protects the resource extraction machines from alien life. But although Jack and Victoria both underwent a memory wipe years earlier, erasing all of their pre-war knowledge, Jack begins to have strange dreams about his past, leading him to question the very nature of his mission.

By far the most impressive thing about “Oblivion” is the cinematography and visual effects. This is an absolutely gorgeous film, stacking up along with “Prometheus” in terms of beautiful looking science fiction epics. I constantly wanted to pause the movie just to take a few seconds to admire what I was looking at. It also showcases some of the best CGI I’ve ever seen. This is a perfect example of how far movies have progressed even in the past three or four years, to the point where I can’t think of one frame that didn’t look completely real, with no green screening or computer effects ever sticking out. More than any science fiction movie I’ve seen in years, the world of “Oblivion” feels remarkably genuine.

It’s the film’s screenplay that’s often an issue. It’s not that anything is outright bad, aside from maybe the opening narration that consists of Jack describing the back-story in a totally ham-fisted, unnecessary fashion for what seems like forever. But so often this just feels so much like a compilation of other movies rather than a new and original world built from the ground up.

Other science fiction films like “Inception” are constantly introducing new ideas that make us wonder how nobody thought of that before. “Oblivion,” on the other hand, makes us constantly say, “That’s from ‘Planet of the Apes.’ That’s from ‘2001: A Space Odyssey.’ That’s from ‘Predator.’ That’s from ‘Star Wars.’” For everything unique in “Oblivion,” there are at least five or six things we’ve seen a hundred times before.

Tom Cruise gets a lot of hate these days, mostly because of his personal life, but he does a solid job here, even if it’s hard to separate the character from our perception of Cruise as an actor. The standout performance, though, is Melissa Leo as Sally, commander of the Tet, despite the fact that for the most part we only ever hear her voice. Without spoiling too much, her character is absolute classic sci-fi, and probably the most interesting aspect of the film. Morgan Freeman is as great as ever, too, but unfortunately he’s given very little to do, and his subplot could use far more development.

There are a few interesting ideas going on in “Oblivion,” to the point where I’d recommend it for hardcore fans of the genre. The twists and turns in the plot, though typically predictable, are at least executed in an interesting way. A lot of little things are cool and memorable, too; the drones function as characters themselves, and the animation and sound design behind them makes them pretty distinct. Some of the action set pieces in the last half work quite well, and all throughout, it’s fun just to sit back and take in the world for what it is.

But unfortunately, though never bad, “Oblivion” relies too much on sci-fi conventions, and on borrowing from other movies, to ever truly stand out. It’s true that movies are constantly borrowing from other movies, and that’s fine, because what makes a great film isn’t necessarily the ideas, but the execution of those ideas. “Oblivion,” though putting in an admirable effort, just doesn’t put a unique enough spin on its familiar concepts to be particularly interesting. The problem isn’t that it borrows so heavily from the films I mentioned; it’s that I was never immersed enough in Joseph Kosinksi’s story to stop thinking about that.