Suspect Wanted For Stealing Purses From Lord and Taylor 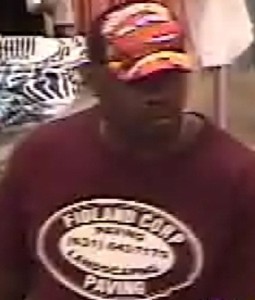 Suffolk County Crime Stoppers and Suffolk County Police Second Squad detectives are seeking the public’s help in identifying and locating the man who stole pocketbooks from a South Huntington store.

A man entered Lord and Taylor, located at 160 Walt Whitman Road, and stole four Michael Kors purses from a display and fled the store without paying on April 9 at 6:15 p.m. The merchandise had a value of approximately $1300. The man was described as black, 6 feet tall to 6 feet 3 inches tall and approximately 275 to 300 pounds. He was wearing a cap with a logo from the Walt Disney movie Cars and maroon T-shirt with a landscaping logo on the front. He was seen leaving in a four-door red vehicle.

Anyone with information about this crime is asked to call Crime Stoppers anonymously at 1-800-220-TIPS.  All calls will be kept confidential. Suffolk County Crime Stoppers offers a cash reward of up to $5,000 for information that leads to an arrest. (photo right)