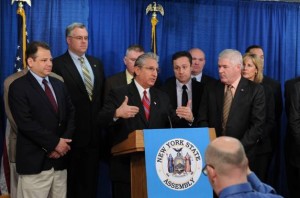 Assemblyman Andrew Raia recently joined his colleagues in the Assembly Minority Conference in proposing a state constitutional amendment to allow for recall elections. This would put in place a system to allow voters the ability to remove an elected official from office through a direct vote before his or her term has expired.

“Our objective should always be to empower the people that we represent, and remind them that the power lies not with the elected, but with the electorate,” said Raia. “The constituents of the two legislators who are currently under indictment deserve the opportunity to have new representation instead of being in limbo for years to come. We should employ the people in assisting us to combat corruption, not another government bureaucrat that contributes to the culture of Albany.”

Under the proposed legislation, the recall process would be initiated by getting signatures equal to 20 percent of the last vote for the office in question on a petition to remove an elected official. That petition of removal is then presented to the secretary of state. Once signatures are certified, the governor would set a date for a recall election. A recall election would then be conducted to determine whether or not the official is to be removed from office.