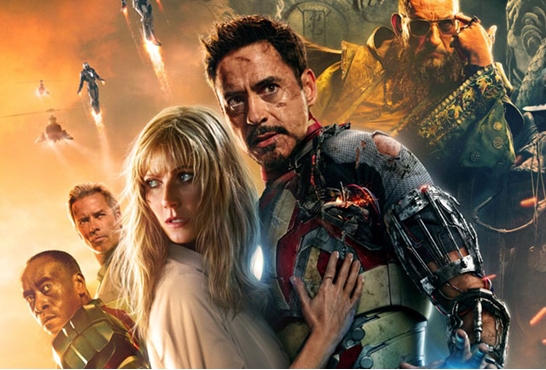 How do you follow a movie like “The Avengers”? For fans of the Marvel universe, seeing all of the characters assembled together was everything we had been dreaming of for years, and a total game changer for this franchise. But how do we go from that to a movie focused just on Iron Man without it feeling like a massive downgrade? How can this franchise possibly sustain itself until “Avengers 2”? Director Shane Black doesn’t quite know how to answer these questions, but all things considered, “Iron Man 3” is another well constructed superhero blockbuster from Marvel, and while falling short of matching “Avengers,” it’s still one of their better outings yet.

“Nothing’s been the same since New York,” Tony Stark (Robert Downey Jr.) says in one of the opening scenes of “Iron Man 3.” Taking place not long after the events of “The Avengers,” Tony is haunted by what he saw during that film: aliens, other planets, and being sucked through a wormhole to his potential death. Having spent so many years considering himself to be the center of the universe, Tony’s entire worldview has changed, and even thinking about the events in New York sends him into a serious panic attack. Considering what’s about to happen, that’s some pretty bad timing.

A disabled scientist named Aldrich Killian (Guy Pierce) has been working on something called extremis, which taps into an unused portion of the brain to regenerate missing limbs and other injuries. In a flashback to 1999, we see that Killian tried to get Tony to invest in his company, but was turned down. Meanwhile, there have been a series of bombings across the country orchestrated by a terrorist known as the Mandarin (Ben Kingsley), who releases videos reminiscent of Osama Bin Laden. After the Mandarin’s attacks begin to hit close to home, Tony Stark issues a declaration of revenge, promising to take him down for good.

The Mandarin really is the main thing to talk about with “Iron Man 3,” though it’s hard to do so without giving away spoilers. To keep it simple, he’s quite different than he is in the comics, leading a lot of hardcore fans to outright despise this movie, calling it a betrayal. I can understand their complaints, but as someone who hasn’t read the comics, I found the Mandarin to be a brilliant, brilliant villain. Based on the trailers, he seemed like just another typical superhero movie bad guy: sort of a combination of the Joker, Bane, Loki…and every other major villain in recent memory. Instead he’s completely different than anything I’ve seen before, and for that alone I really admire this film.

Guy Pierce’s Adrich Killian isn’t nearly as interesting of a character, though. His introduction in the opening scenes are intriguing, as is the idea behind extremis. But once Killian starts to become an actual villain, his motivations are never really clear. I still don’t fully understand what his plan was or what he was trying to accomplish throughout parts of the movie, and his character just wasn’t very interesting anyway. The only real reason Killian is memorable is because of Pierce’s excellent performance, but the character is never fleshed out enough to stand out in the way that Bane or Loki did. He also just is never that menacing, and at no point did I get that moment when I felt like Stark was really outmatched, or was even being challenged all that much.

As a follow up to “ The Avengers,” “Iron Man 3” works quite well, though definitely not for the same reasons. It shifts us down from the big, bombastic tone of that film, to a more personal, slightly darker story that’s a pretty satisfying “conclusion” to the Iron Man saga (of course, we all know he’ll be back.) Shane Black does a lot to humanize Tony Stark in the movie, making him go through a lot of difficulties that bring him down to our level and feeling less like the indestructible hero of the other installments. Seeing Tony have to improvise during a battle when his suit isn’t totally working, for example, makes for some pretty tense and unique sequences, although this is never quite successful as the humanization of Bruce Wayne in “The Dark Knight Rises.”

But wow, those action sequences are absolutely magnificent. Besides “The Avengers,” “Iron Man 3” has the most satisfying action in any Marvel movie so far, a huge improvement over the mediocre “Iron Man 2.” Within the first half hour we get an incredible sequence involving the destruction of Tony Stark’s house, featured prominently in the trailers, which is nothing short of incredible. It feels more real and down to Earth than most of the sequences in “The Avengers,” as much as I adore that movie. There’s another scene involving Air Force One that is totally jaw dropping, and the final battle is every Iron Man fanboy’s dream, even if it does feel pretty small in scale after the city wide all out war in “The Avengers.”

Like “The Avengers,” “Iron Man 3” is truly hilarious at times, feeling almost like an action-comedy in some places. This makes sense considering Shane Black’s history with “Lethal Weapon” and the lesser-known “Kiss Kiss, Bang Bang.” When so many other superhero films are focusing on a very dark, serious tone, I love that Marvel is embracing a lighter, more whimsical feeling with their movies, taking us back to their comic book roots and making us feel like little kids watching a Saturday morning cartoon.

As a movie that exists in the world of “The Avengers,” though, it’s puzzling that S.H.I.E.L.D is totally absent from the events of this movie, considering how prominent they were in “Iron Man 2.” Granted, a major complaint of that film was that it felt too much like a lead up to “The Avengers,” but having none of those characters present anywhere in the movie is a bit odd. What exactly is Captain America doing when the President is being threatened by a terrorist? And what is S.H.I.E.L.D doing when one of their top allies’ home is being blown up? It feels bizarre that after Marvel has put in so much effort into tying their films together like this, there’s basically no attempt to do so here. In some ways that’s good, because we get to focus just on Tony, but it’s also somewhat jarring so close after “The Avengers.”

The end credits to the film promise us that “Tony Stark will return.” Note that it doesn’t say “Iron Man will return.” That’s because, while the first film really felt like an introduction to the idea of Iron Man, this movie feels like a conclusion to the idea of Tony Stark, focusing more on him as a character than his superhero persona. If we are to believe that this really is the last of the trilogy, this feels like an appropriate conclusion to the character.

“Iron Man 3” is a great installment to this franchise, though not without its flaws. Though the Mandarin is an excellent villain, Guy Pierce’s Aldrich Killian is very underwhelming, and could use far more development. After “The Avengers,” “Iron Man 3” does feel somewhat like a downgrade, and at times I couldn’t help but want to skip ahead to “Avengers 2” and see what’s going on with Captain America and Nick Fury. But until then, if Marvel can keep their single character films as enjoyable as this one, I’ll be quite satisfied.