May 10, 2013 5:58 pm | Filed under: Around Town,News | Posted by: The Huntingtonian
The NYS Department of Environmental Conservation closed shellfishing waters in the Town of Huntington on Friday after finding a marine biotoxin that can cause a potentially fatal illness in several shellfish samples.

In the Town of Huntington: The harvest of shellfish and carnivorous gastropods is prohibited from all of the normally uncertified shellfish lands in Northport Harbor, Steers Canal and Northport Bay, lying southerly of a line extending northeasterly from the highest point of the green domed cupola of the residence located at 24 Mariners Court, Centerport, on the northeastern shore of Little Neck Point, to the highest point of the gazebo located between the shoreline and the residence at 8 Hawkins Drive, Northport, located near the eastern shore of Northport Bay. See map below: 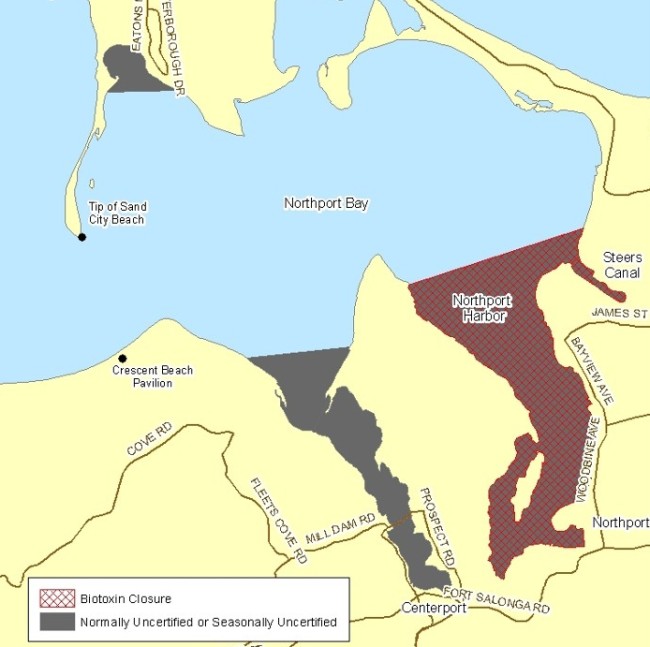 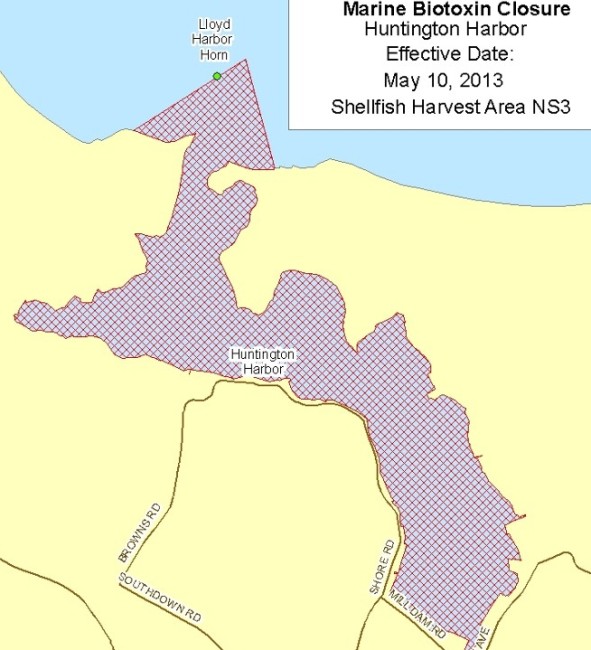 The state said it will reopen the shellfishing areas once the biotoxin clears. Harvesters can call 631-444-0480 for updated information about the closures.

What is a biotoxin?

Biotoxins are toxic substances produced by a living organism.  In the case of NY shellfish closures, we are concerned with marine biotoxins produced by naturally occurring algae. The toxin that causes paralytic shellfish poisoning (PSP) is known as saxitoxin.  Shellfish accumulate the toxin when they feed by filtering algae out of the water.  Although the shellfish are unaffected, over time they can accumulate biotoxin levels that are dangerous to human health.

What shellfish are affected?

All bivalve shellfish (mussels, clams, oysters, scallops) can accumulate unsafe levels of the toxin that causes paralytic shellfish poisoning (PSP).  Whelks and other gastropods (moon snails), which prey upon shellfish, can also have toxic levels.  Crustaceans like lobsters and crabs are not known to accumulate biotoxins in their meats but the hepatopancreas (green gut; tomalley) can have unsafe levels of toxins and should be discarded.

What is paralytic shellfish poisoning (PSP)?

PSP is a very serious illness that can start with a tingling, or numb feeling, in the lips, tongue and face within minutes to a few hours after eating contaminated shellfish.  Depending on the amount of toxin that’s ingested, the tingling can spread to the fingers and toes, followed by paralysis of the arms and legs and difficulty breathing. Some people have the feeling that they’re floating or may become nauseous.  If enough toxins are consumed, the paralysis can spread to the chest and abdomen and, when the muscles used for breathing become paralyzed, the illness can result in death.

Who is at risk?

Anyone who eats contaminated shellfish is at risk. It’s important to be aware that biotoxins are not removed by cooking or freezing shellfish.  Anyone who becomes ill or experiences symptoms after eating shellfish should seek medical attention immediately.

How do you know that the toxins are present?

The NYSDEC monitors for the biotoxins in marine waters using mesh bags of blue mussels placed at various locations around Long Island. These monitoring stations are set up in the early spring before the algae blooms are expected to occur.  Mussels are especially sensitive to PSP toxins and tend to accumulate the toxin faster than other shellfish.  The DEC tests the mussels regularly to determine if unsafe levels of toxin are present.  When they are, the area is closed for shellfish harvesting.  The DEC also works with researchers at Stony Brook University to monitor the levels of toxin-producing plankton in the water column.

But the water and shellfish look fine …

The term “red tide” is often used when describing marine biotoxins, but it is not a good description and may be misleading.  PSP is rarely associated with a red discoloration of the water.  The toxin can be present in high amounts even when the water is clear and can remain in the shellfish long after the algae bloom is gone. Shellfish are generally not affected by PSP toxins and may continue to look perfectly normal.  Only a laboratory can reliably test the shellfish and determine the level of toxins that are present.

How long does the risk last?

The algae that produce the PSP toxin are temperature dependent. In New York, they generally begin to bloom in early spring and then disappear again when the water gets too warm.  It may still take shellfish a few weeks after the bloom ends to purge the toxins that they’ve accumulated so the DEC continues to monitor and test the shellfish until the toxin levels drop back down to safe levels.  It’s also possible for a second bloom to occur in the fall, when water temperatures start to drop again but we haven’t seen that occur locally.