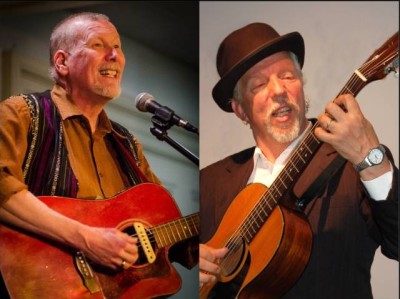 inger-songwriters Gilles Malkine and Martin Swinger will be the featured artists during the Folk Music Society of Huntington’s monthly Hard Luck Café series at the Cinema Arts Centre on Thursday, May 16. The 8:30 p.m. concert will be preceded by an open mic at 7:30 p.m. Tickets are $8 for Cinema Arts Centre and FMSH members; $12 for non-members. The Cinema Arts Centre is at 423 Park Avenue in Huntington. For more information, visit www.fmsh.org or call (631) 425-2925.

Gilles Malkine of Ulster County in New York’s Catskill Mountains is a multi-instrumentalist and singer, an actor, composer and a songwriter, whose career has taken him from playing guitar with Tim Hardin at the Woodstock Festival in 1969 to performing at Carnegie Hall and on Broadway, where he was part of The Dixie Dewdrop, a two-man musical portrait of country music’s Uncle Dave Macon. Along the way, he has collaborated and recorded with the likes of Hardin, John Sebastian and Artie Traum, and he shared the stage with performers ranging from Jacques Brel. Jesse Colin Young and John Cougar Mellencamp to David Amram, Kinky Friedman, Levon Helm and Peter Schickele.

Malkine plays guitar, violin and percussion, and has written numerous instrumental pieces for guitar and strings, as well as many songs and musical scores.  His compositions take varying styles, including ragtime, classical, and South American, and his verse has been published in Sing Out! Magazine. His latest CD, a self-produced solo effort entitled TimeDog, was released in 2012 and features both songs and instrumentals.

Martin Swinger is a Maine-based singer-songwriter with a fluid tenor voice, an engaging stage presence and an out-front social conscience. Originally from Georgia, he began singing and playing several instruments as a child. He counts Paul Simon and Harry Nilsson among his early musical influences. Swinger’s songwriting career began in college and took root in his twenties when his song, “Look Who’s Crying Now,” won a Certificate of Merit from the American Song Festival. Moves to Kentucky and Virginia and stints in several regional bands allowed him to hone his skill in writing powerful story songs that lyrically and melodically illustrate the variety of human emotions.

Along the way, Martin Swinger has recorded five CDs, including his most-recent release entitled Moon (2011). He’s been a repeat performer at the Kerrville Folk Festival, where he was honored as a Kerrville New Folk Finalist in 1997, and has also performed at the Boston Folk Festival. Last year, he won the Performing Songwriter Competition sponsored by The Rose Garden Coffeehouse in Mansfield, MA. With his engaging personal style, and accompanying himself on guitar, Swinger delivers songs that are humorous, outrageous, intimate and universal, running the gamut of topics from autism to oysters, Betty Boop and Buddha. More information on Swinger may be found at www.martinswinger.com.

Now in its 44th year, the Folk Music Society of Huntington presents two monthly concert series, a monthly folk jam and sing-along, and an annual folk festival in conjunction with the Huntington Arts Council during the summer. Its First Saturday Concerts at the Congregational Church of Huntington, 30 Washington Drive (off 25A), Centerport will feature the soaring three-part harmonies of The Stray Birds on June 1.