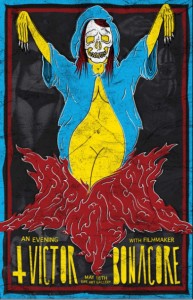 Underground Filmmaker Victor Bonacore is coming to Long Island’s own Ripe Art Gallery in Greenlawn for their first ever VIDEO ART SHOW.   With an anslaught of visual creepiness, grit, filth, trash & satire, comes an evening not to be missed.

A Long Island native, Bonacore has been making films since the VHS camcorder days and hasn’t stopped since. Using mixed media including, 16mm film, Super 8mm, and video, Bonacore’s work favor’s the dark underbelly of society while wielding an axe at authority.

A film graduate from Adelphi University, where he took home the Creativity in Film & Video award, he then took his talents to Media Blasters in NYC a film distribution company, where Bonacore ran the theatrical department.  He gradually moved into their production department and starting producing films for them.

You can see much of Bonacore’s film work through the music videos of local musician Johnnie Lee Jordan and the recent commercials for Long Island video store 112 Video World and the Long Island Roller Rebels roller derby team. Bonacore shows his diversity outside of town working alongside filmmakers Frank Henenlotter & Jim Vanbebber and through partnerships with controversial animator Jimmy ScreamerClauz and family art collective Little Punk People out of New Jersey. His films have been the subject of numerous screenings and films festivals throughout the country, including the Fantasia, Coney Island & Boston Underground Film Festivals, and was a recent special guest at the Film Threat screening of his short film “Ice Cream Sunday.”

This event will screen never-before-seen footage of Bonacore’s upcoming film “Blood Wings: A Satanic Fantasy” and selective scenes from the long awaited documentary “Diary of a Deadbeat”.

Along with Super 8 & VHS shorts,  trailers and music videos ranging from gangster rap to female fronted punk.
Accompanying Victor will be the grossly cute work of controversial artist David Graham and a live performance by local favorite Johnnie Lee Jordan.